Bring on the Valentine's! 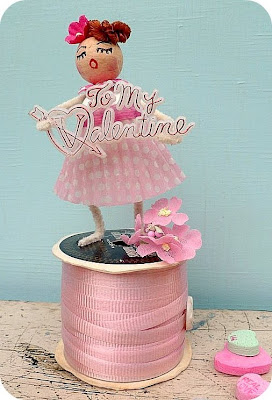 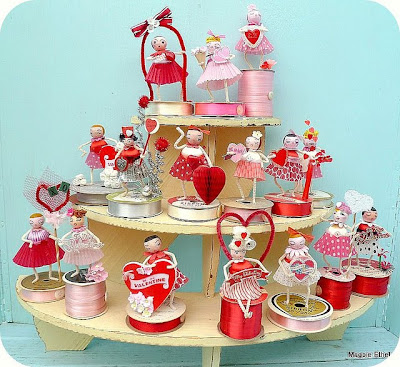 Baby it's cold outside like you wouldn't believe. The snow from a couple weeks back is still here, only now it's crusty, old, dirty, and dangerous...and it's lying around like a lazy winter vagabond lodger overstaying his welcome at our quaint country inn. Well, to his advantage we got a few more inches of fresh powder last night...those big winter wonderland style flakes came down in a hurry...and wouldn't ya know it...that crusty old vagabond got himself all prettied up! The craggy roadside mountains look all soft and pillowy again! Ha...we know what lies beneath.
But this time...man is it cold! Not sure of the temp and ya know what?...I'm not one for temps anyway...they always seem like such arbitrary numbers...I just go by Aaron's response when he comes in from walking the dogs...he either says it's "cold" ...or he says it's "COOOOLLLLLDDD". And today it's the latter. So, we're stickin indoors and I've been trolling the interweb...all my regular haunts...and jeez!! Apparently Valentine's is in FULL SWING here online! And to this, I am not opposed. Sometimes I get annoyed at the rushing of things...like "people, give it time, let it breathe, the day will come soon enough...hey Michaels, what's with the Christmas stuff in September? We're still working on our Halloween crafts for Pete's sake" (who is Pete anyway?)... But like I said: Bring on the Valentine's! It's all such pretty stuff with a pretty message...I mean, with this weather...what better way to warm the heart than with a whole bunch of hearts?! right?
So, I started pulling out some of my fantastic Valentine's stuff from over the years...and the very first things I grabbed were my super duper adorable little pipe cleaner girls that were made by the gal who was born with a heart full o' whimsy... the incomparable: Laurie Romanaggi aka Magpie Ethel.
So while handling my gorgeous little gals I said to myself " I wonder if good 'ol Laurie has some new 2011 stuff up on the interweb yet?" Well, the answer was a resounding YES ! (see above!) I got a little lightheaded I must admit. And that one that I've featured in close up...it's mine mine mine...( I'm not saying that like a greedy scrooge McDuck...no, more like a little girl with that puppy from the window...just purely excited.) Anyway, Magpie Ethel is a post unto herself...and I promise that she will have her very own post in the future, but for now I just wanted to shine a little light on her to usher in the Holiday of Hearts!
Oh yeah, one more thing about the weather...right now, every single state except Florida has snow on the ground! Wowee! Who knew Hawaii got snow?! Maybe everybody knew...but not me.

Alright, last post I announced the Everyday is a Holiday Design Team and the energy surrounding it has been fantastic! I've been inundated with emails...all the gals on the team have been getting emails...comments on my blog, on their blogs, and this thing is still in it's infancy. You guys have no idea how good it feels when you have an idea, you tell the world, and the world says "hey...that sounds great!"...my warm heart could melt 49 states worth of snow!
Ok, enough gush....on the previous post I spotlighted Jenn Hayslip. So tonight it's time to spotlight Design Team Member # 2 ! One of my absolute favorite Canucks! and the one gal on the Team who truly makes us an International organization! Yes, she's Canadian, she's adorable, she's a heck of a blogger, a heck of a talent, and I don't think she sleeps! Honestly... I don't know how she does all that she does: 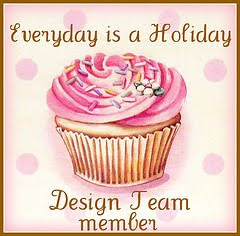 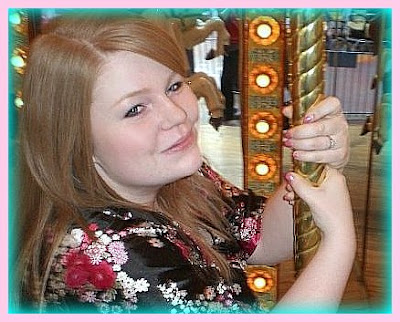 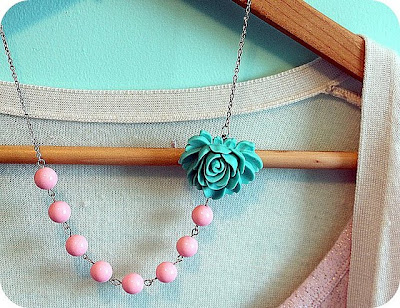 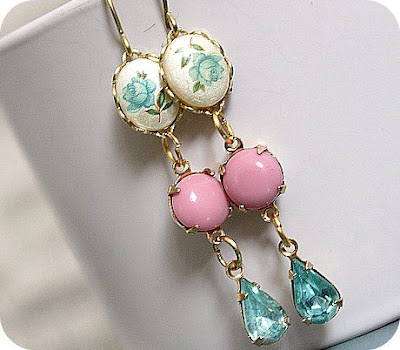 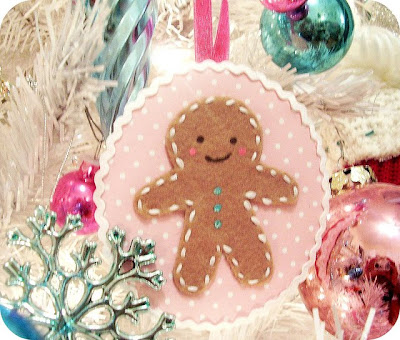 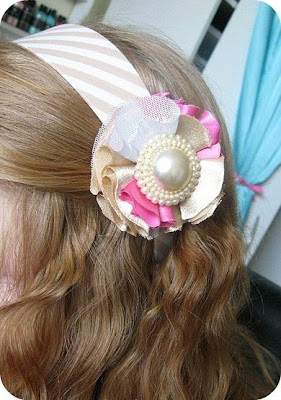 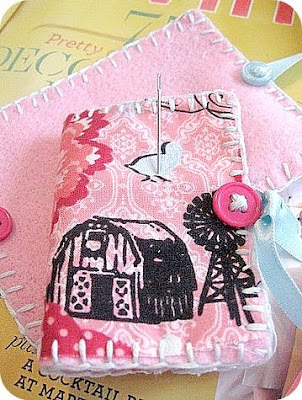 Meet Chelsea, when you see the level of her artistry, the breadth of her accomplishments, her amazing eye for all things glittery, crafty & stylish...you are first amazed that this girl is ONLY 25 years old! Then when you factor in the ages of her two adorable sons, ages 3... and 5 months... you might start to become suspicious (maybe she has an identical twin sister that she keeps hidden away, and they split the duties! ) But No...Chelsea does it all herself and despite her age...she's been at it for quite a while. She's been making things for as long as she can remember. Growing up, her mother was a hair stylist and Chelsea soon learned that she "sucked at hair" (Chelsea's words, lol ! ) ... so then she became a make-up artist. She got back into the DIY world heavy duty after getting married in '08. Being a new mom, making crafts at home was a great creative outlet. She loves Aqua, Pink, Unicorns, Glitter, Girly Vintage, Food, & Dancing! She has a pretty crazy sense of humor (me & Aar can vouch for this...and we've never even met her in person!)... and she's got an obsession with COLOR! What's not to love?!

So, that's Design Team Member # 2. Jeez, I'm way too excited already. And I really am...I'm not just saying it to say it. I think of putting together Inspiration Kits and sending them off to these fab gals...and I get a little goose bumpy in anticipation for the results!

Well, it goes without saying that ART makes my world go round. And that word ART is big for me. It doesn't just hang on walls...it's EVERYTHING. And if you're a regular reader of my blog then I'm sure that I'm preaching to the choir. ART is the blood in my veins, the thoughts in my head, the calluses on my fingertips, the glitter in my rug, the paint specks on my desk (and sometimes on my dog's tail : ) ) ... We...meaning me and you guys who read this blog...and the other blogs that I'm thinking of right now...We live the Artful life...no matter what your Art is...it means more to your soul, to your being, to your existence, then you'll ever know. We either create in private...or in public...or maybe we don't really create too much at all...maybe it's all still in your head....gathering up speed and momentum for it's day in the sun...heck, Aaron tells me that he writes a song verse every single time he takes the dogs for a walk....and those songs will probably never see the light of day...but so what? Does it really matter who see's , or who knows? ART is what gets you through your day maybe...or maybe it is what puts food on the table...Your Art might not even have a physical application...maybe your Art is simply Seeing Things in your own special way...maybe when you read a book, you read that book like no one else does...maybe the words are more than words for you...you don't see a story...you see texture and color and shape and beauty....Whew, I can go on and on...
And the reason I bring this up is because I spend a lot of time online...a lot of time on BLOGS. And what kind of blogs do I love??? ... ARTFUL Blogs. Our kind of people...People who can see the things that not just anybody can see. People who can tell us things and show us things that not just anybody can show & tell. To me... ART is the REAL WORLD... all the other stuff....that stuff that keeps us busy...the stuff that makes "their world" spin...well, to me, that's just the stuff that gets in the way of ART. 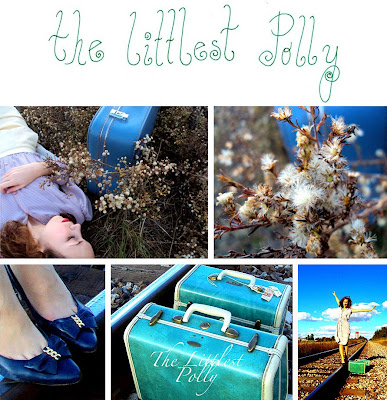 So this leads me to a great Artful blog that I recently became a follower of called The Littlest Polly. I'm so proud to be sponsoring a give-away over there right now. Polly is an Artist, a lover of life, fun, people, places, things....Just take a visit over there...words come to mind...words like Vibrant, Sparkling, Vital, Vivid, Moxie...she really puts together a smashing blog. She presents to you a world and you want to join her. As you've read above...I take ART very seriously...which also means, I don't take it serious at all...you know what I mean...I don't put it in a tiny rigid box...I spread it around all over everywhere and everyone. And that's why I visit the blogs that I visit...there's a whole lot of us Artists out there...and the more we support each other the better. So, definitely make The Littlest Polly a destination! AND...enter that give-away!!

Ok, that's all for now...time to watch a movie! Thanks again for stopping in!
xoxo, Jenny