a little recap of Aaron's Birthday 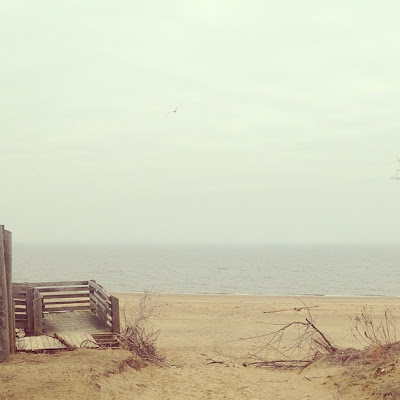 (a little vid from the beach)

It had been so so incredibly cold the past week or so. We even had the pleasure of some frozen pipes, which then led to one bursting. This predicament was remedied by my little brother climbing under the house on his belly through an ice cold river of mud with water raining down on him til he found the source. He then cut and replaced the pipe....and informed us that in his estimation most of the pipes will need replacing as well. Party!

So, yesterday was Aaron's birthday and it was so incredibly pleasant. Yes wet, yes grey...which would normally bum us out a bit...but coming from needing that space heater blowing on us non stop it was like a gift to have some temperatures over 40! We had planned to go to the movies with Aaron's parents later in the afternoon, so we got a bunch of work done in the morning and took an afternoon walk around town. We started up on the beach...and again even though it was grey, it was nice. Normally we can see NYC and a handful of bridges in each direction...but yesterday it was as murky as a good episode Scooby Doo. The water was moving gently...we saw a seagull or two. Nice and quiet. We walked down to the boardwalk to see how the post Sandy rebuild was progressing. There were signs boasting a Spring 2013 comeback, but wow...there is so much to do! They are still pumping water out of some buildings! We saw stands opened up...their owners shoveling sand and debris out. Jeez, so much to do. 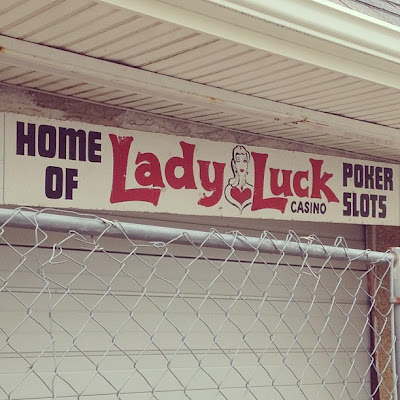 There are fences around everywhere...for safety reasons. I love this Lady Luck sign. 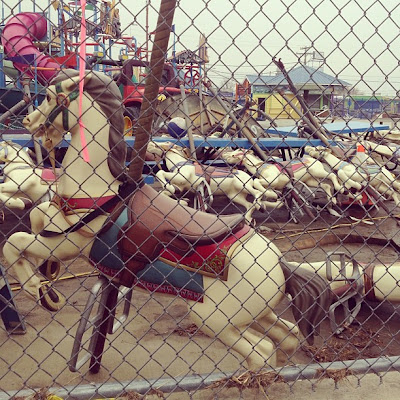 The horses from the destroyed carousel which I shared in my Hurricane Sandy Story are now across the street in the waterpark. I'm not sure what they have planned for them. There's a tendency to attach personalities to these guys...like they're all dressed up with no place to go...awaiting their time to shine and ride again. 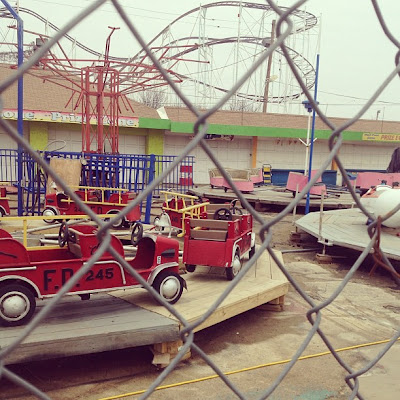 The kiddie park is bare bones right now and so many of the rides are just gone. 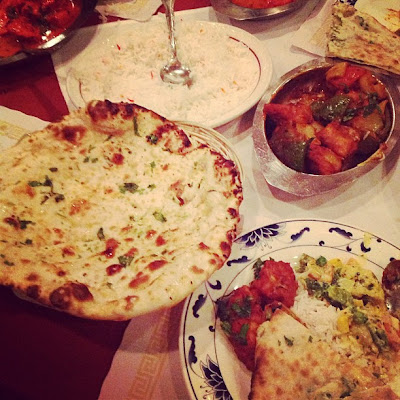 So, onto the evening...Aaron's parent's picked us up around 3:30...which might be early for a Bday party, but we had planned to see a movie and then have dinner. Being that the movie was nearly 3 hours it only made sense to go early and then eat at a normal time. And the movie plans came about due to convenience and coincidence. Aaron's Birthday fell on a Tuesday, the day that the local theater does a date night special of buy one get one free. We saw Zero Dark Thirty...which was just...wow! Intense is not the word. My heart rate didn't level out for a good 10 mins after we left the theater. Fantastically made film.

After the movie we went to our favorite Indian restaurant...Neelam! We hadn't been there in so long...so it was a real Bday treat for Aaron...Indian food is our favorite. Aaron's parent's were also psyched to go even though they have only had Indian food once or twice before. They had really enjoyed it previously and trusted us to pick good stuff from the menu for them again. We went with our favorites of Chicken Tikka Masala, Navratan Korma, assorted pakora and samosa, pappadum, garlic naan...and we tried one of the specials...an Indian chicken chili. Ohhh boy it was FANTASTIC! Holy crow man...just deeelish! 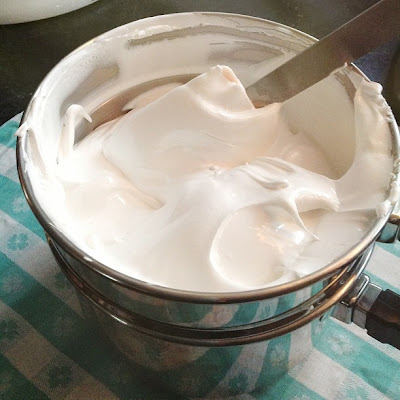 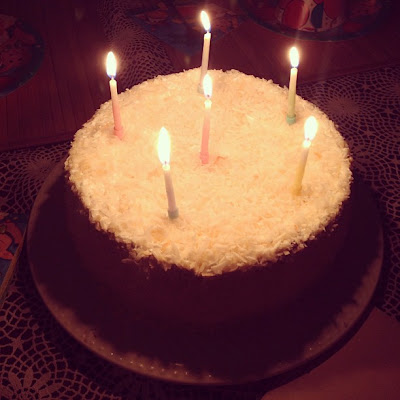 After dinner we went back to Aaron's parent's for Cake! As you know I'm the baker in the family and I love baking Birthday cakes! Aaron and his mom share January Bdays and we decided to do a combined party. Barb chose this Toasted Coconut Chocolate Cake. It doesn't have my typical all butter type of frosting. It's a classic 7 minute frosting made with sugar, egg whites, corn syrup, and vanilla. It's nearly identical to Marshmallow Fluff. I've made it for whoopie pie filling in the past. It's super old fashioned. Lots of our vintage baking books have very similar recipes. The cake itself was quite dense, not too sweet...kinda like a devil dog. Not my usual devil's food or fudge cake. I really like trying new recipes, and I'm on pins and needles till we cut into it and try the first fork full. It was good...not my favorite of all time...but  good! We had a piece again this afternoon and we both liked it even more!


It was a great time! When asked how his Birthday was, Aaron exclaimed  "GREAT!" 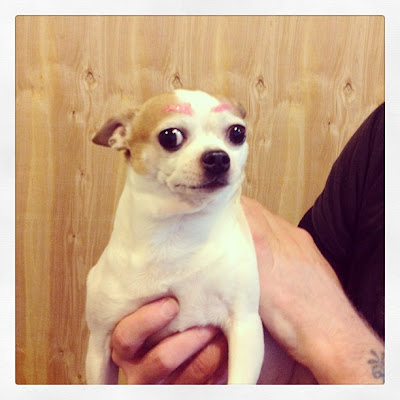 Ohhhh and will you have a look at this guy?! Little Jack who is allllways "helping" us when we paint and work bumped into some pink paint. Since he inadvertently gave himself one pink eyebrow, Aaron decided to even him out. This kid is a nut.

Ok, thanks for catching up...or allowing me to.
xo, Jenny

PS... Gosh, the other morning I accidentally deleted a bunch of pending comments here on the blog...thinking I was in the spam folder! So, I'm so sorry if your comment hasn't shown up. I was sooo sad when I realized what I had just done. :(    Feel free to repost it!!