In Memory of our sweet little feathered friend "Bird" 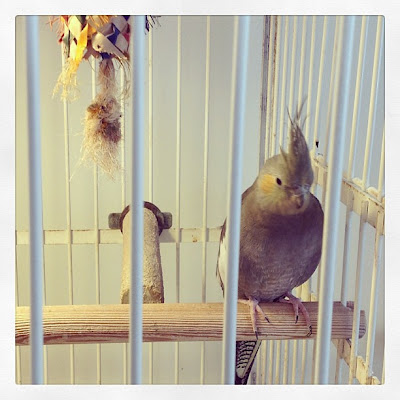 Today our dear friend "Bird" passed on. It was sudden and we were right there as it happened. Most likely it was a heart attack. We miss him so so much already. His beautiful singing filled our days. We work from home and he was such a big part of our daily routine. He chirped when we opened doors, when we took the dogs outside he'd see us out the window and yell as loud as he could so that we'd hear him inside, when we used the microwave he had something to say, when we listened to music. In the morning Aaron would come downstairs first and Bird would be silent...he'd wait til we were both on the couch and then he'd start singing to start the day. His absence is truly palpable.
We'll miss giving him his spray of millet...he'd get so excited as he saw us open the bag. And the little nibbles he gave to the tip of Aaron's nose...and the way he'd slide down the rungs of his cage like they were fireman's poles.
He was present for every part of our day. Even when he'd chirp loudly and relentlessly it was never ever anything close to a nuisance...he'd be screaming his head off to the point where we could barely continue our conversation and we'd just smile and laugh and say "Bird...you're crazy!"

This commercial was his favorite! Just a few minutes ago it came on the television and it was the first time ever that we didn't hear bird chirping at the end of the jingle. It was a little hard to handle. We loved that he had his "thing"...something about the Empire Carpet jingle thrilled the little guy.

And this song...oh, jeez we just listened to this and we couldn't hold back the tears. Every time the whistling part came it was Bird's time to shine.

We'll miss the beautiful little guy. He was such a gift to us and I hope he knew it. There's no way that we ever could've reciprocated the magic and sunshine he brought to us. I seriously don't know how to explain it...he grounded us and kept things light when they could've been very heavy. Such a beautiful little guy.

Bird, thank you for blessing us with your presence and your song.