Our July so far! (including a July 4th recap) 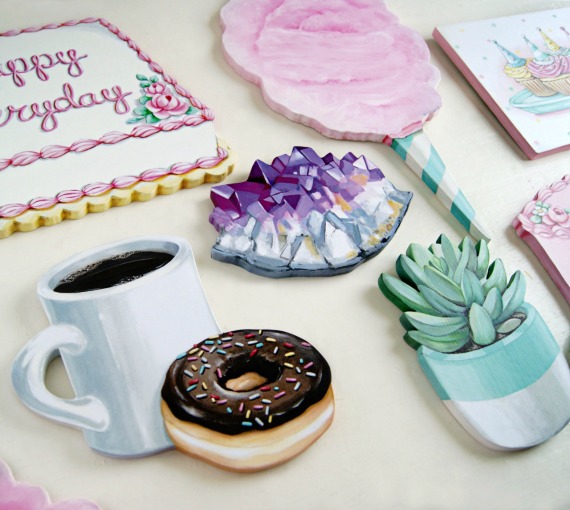 July is usually a pretty great month for us. We're not exactly fans of hot weather, but we were lucky enough to have some mild days at the beginning of the month. We got out and did some summery stuff, celebrated the 4th with my family, and got a lot of work done. Aaron loves setting up the saw on the sunny deck and cutting out as many plaques as possible in anticipation of the sweltering days ahead. And it isn't so bad that the latter part of the month is crazy hot, since we have all of the detail work to finish in the studio. And as far as our orders go it feels a little different this year. We usually are working on lots and lots of whatever the most popular piece of the moment is. But this year there doesn't seem to be an overall favorite. Our worktable constantly looks like the pic above. And even though there are some advantages to repetition, like never having to change color palettes, we're very happy to have the variety we've been having lately. 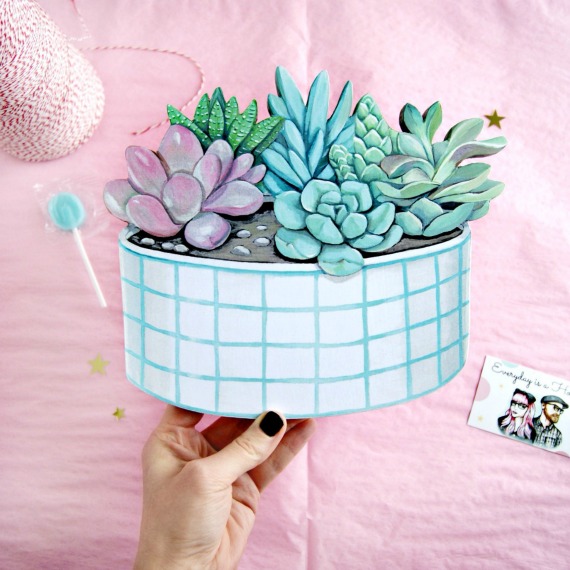 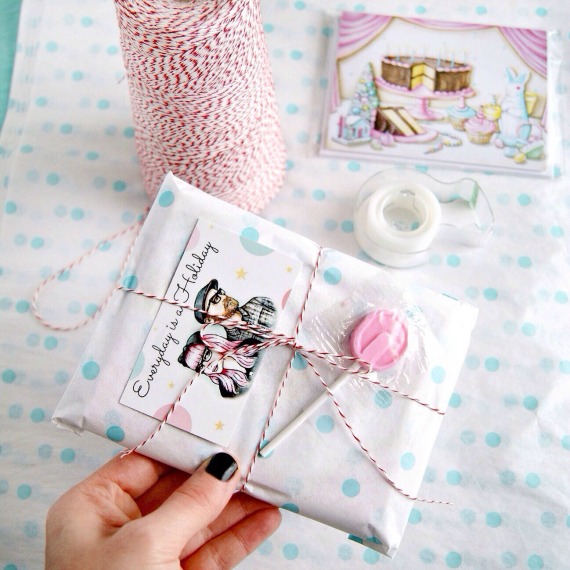 Another great thing about July is that on 4th of July weekend we adopted our dearly missed Jack, and a few years later, also on the weekend of the 4th, we brought home Lieutenant Dan! It's our two year anniversary with this little guy! And we're constantly reminded of that fact by our Facebook Memories. Apparently we posted a pic of Dan every single day for two weeks straight in July 2014. 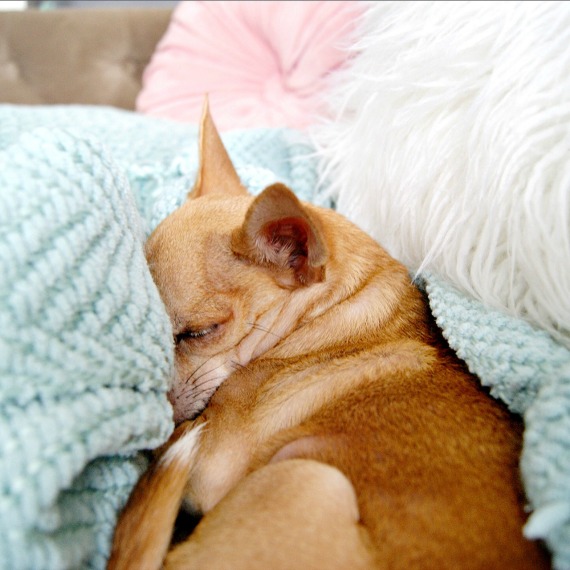 This is how Lt. Dan spends the majority of his day. I mean, he does like to go out on the deck and lay directly in the hot sun a couple times a day. And he looks amazing when he does it! Aaron says he looks like a "village dog". Like he's lying in the heat on some rural dirt road town in Central America.
But after a few minutes in the heat he wants to come back inside and go back to being a crank-the-AC-and-swaddle-me-in-blankets kind of guy. 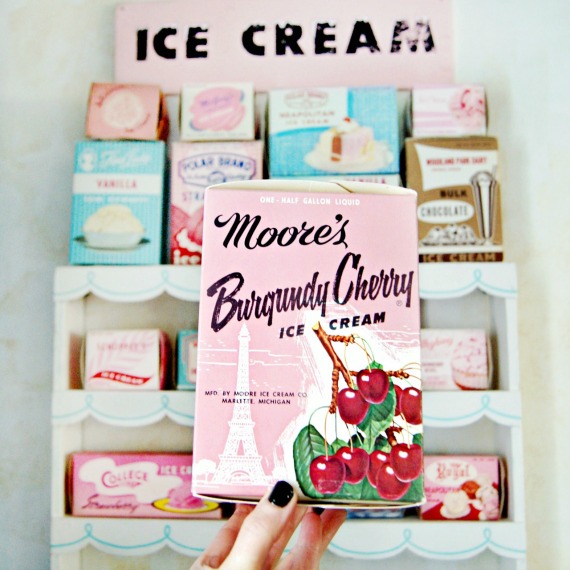 You know, I had already loaded this pic onto the blog and then realized that I'm posting this on National Ice Cream Day. But it's sorta National Ice Cream Day every day over here. This is the latest addition to my vintage ice cream carton collection. I looked up Moore's Ice Cream, and they still exist in Marlette, Michigan, just like it says on the box. And the place looks like it hasn't changed in many years. I love that!
As you can see in the background of this pic, my shelf is overflowing. I've got cartons displayed all around the kitchen, but I'm on the hunt for another perfect display shelf or case that I can quickly fill to capacity. 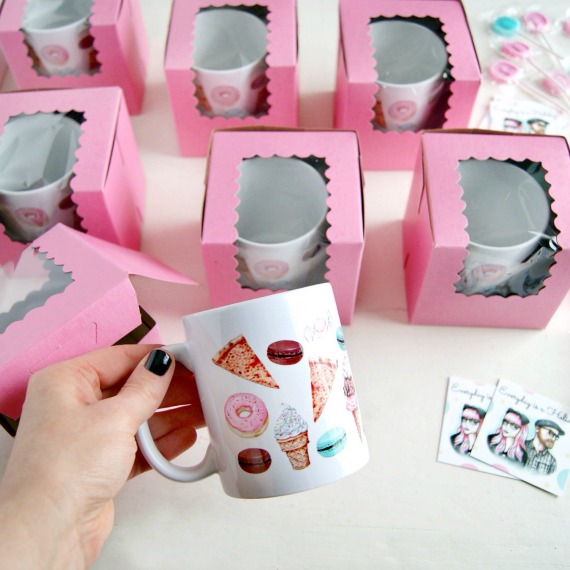 I feel like I can rave about our Fave Craves mugs without feeling self conscious. Mainly because they're pretty much the one thing in our shop that we don't make from scratch. I'm just super happy with how great our paintings reproduced, and the quality of the mugs overall. We use ours every day and every time they come out of the dishwasher they looks absolutely brand new. Again, I'm not saying any of this in an "advertise-y" way. I just really love these things!
If you follow me on Instagram, @jennyeveryday, or on Facebook, you might have seen that we're doing Friday Specials every Friday for the rest of the summer. The mugs were our first Friday Special item, and I'm thrilled to say that we had to quickly order more to restock the shop! 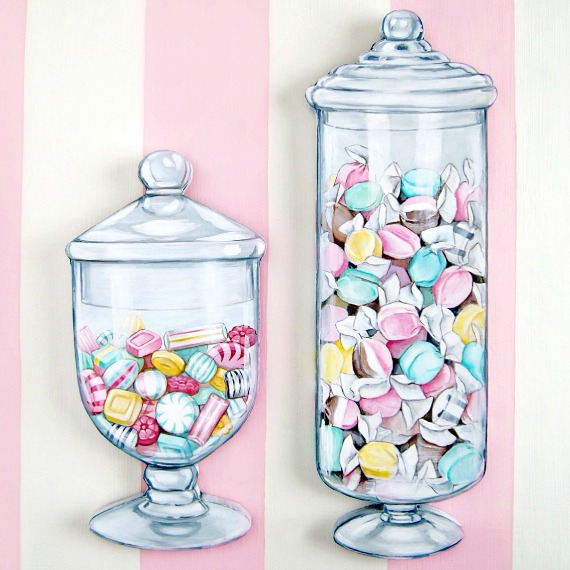 We've got a growing list of things that we simply MUST PAINT. Salt Water Taffy and Hard Candy have both been on the list forever. Initially we actually had a couple of other ideas for exactly how we wanted to paint them. But then all of the sudden we thought of these candy jar designs, and that was it!
The real trick was finding time to paint them. Well that's our main challenge every single time we do a new painting, but with these we happened to be extra busy at the time, and they're also the types of paintings that require a lot of focus...all those individual candies, all piled up in a realistic looking way, and then making them appear like they're behind glass.
If it sounds like I'm complaining, I'm totally not. Figuring out the little details is pretty much what every artist lives to do. It really isn't the achievement of a finished painting, or the positive public response of a painting that the artist is working toward. It's more about having an idea, and then throwing down your own personal artistic gauntlet, and then winning the little creative battles with yourself along the way.
Well, needless to say...candy paintings have been a long time in the making. Besides salt water taffy being our signature little extra goodie in the packages we ship out...vintage salt water taffy boxes, and holiday hard candy tins are some of our favorite collectibles. And if you saw our previous post, you might have read about how much I die for anything having to do with old time candy making! 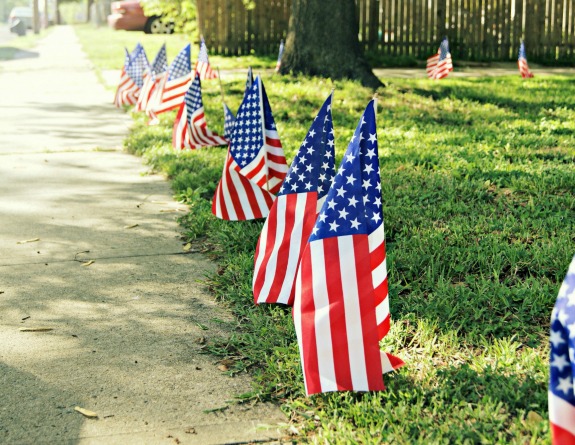 Jeez! I'm telling you, I really tried to blog about 4th of July last week, or more like a week and a half ago at this point. I figured Tuesday the 5th I could post, or Wednesday at the latest. But boy oh boy, there was a whole lotta work waiting for us after the three day weekend. And for once we actually kept those three days completely work-free. Well, we did some work around the house, but that's different.
As far as holidays go, 4th of July is always super laid back. There's no pressure to find the right gifts, the food is fairly easy, and I don't know...I guess it's a day that really works for my family. My family can get pretty loud, and being that there are big explosions in the sky all night, it's the one time that we don't seem like the loudest bunch in the neighborhood. ha!
We actually had our 4th of July on the 3rd. The Fam was gathering at my brother Richard's house, and since he had to be at work super early on the 5th, it was way better for everyone if we moved the party up a day. 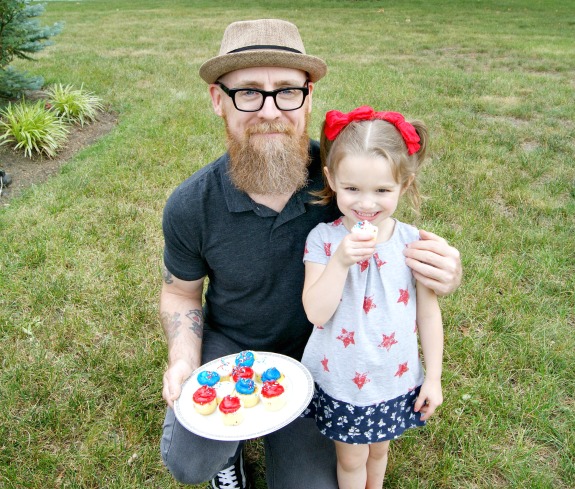 Here's Aaron with our niece who happens to hold the world record for quantity of cupcake frosting ingested in a 15 minute period. Well, even if she doesn't hold the actual record, I bet she's close. 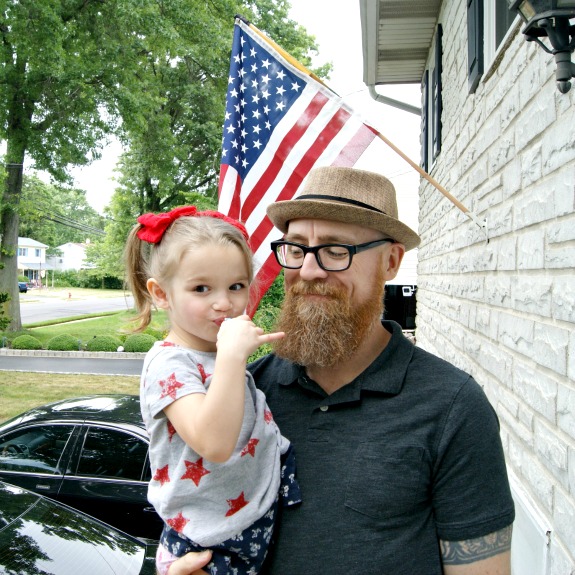 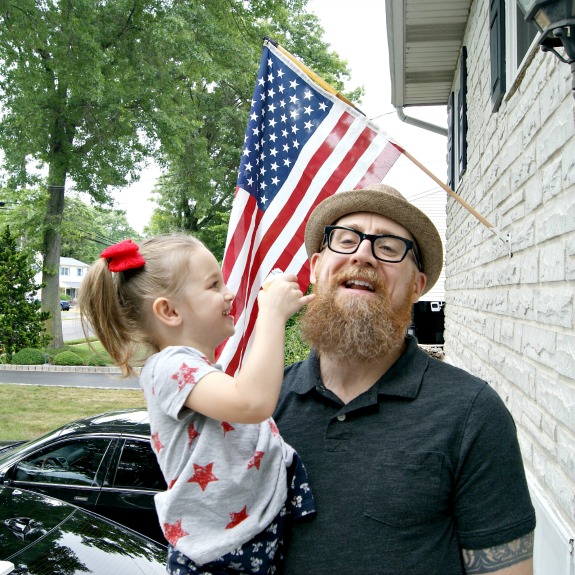 But she's also pretty good with sharing. I think right here she was actually trying to share with uncle Aaron's beard. 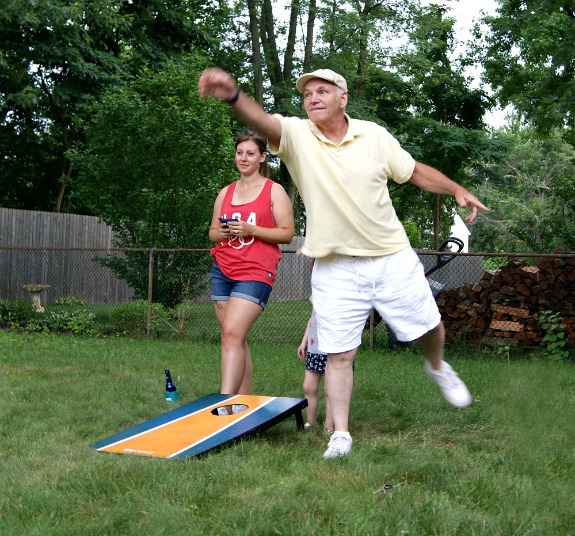 Any of you guys play Cornhole? Here's my dad most likely showing off for the camera. You know...throwing the bean bag with a bit more gusto than necessary. And jeez Louise, do you see the miniature person peeking out from behind his leg?! She manages to be involved in everything going on all at once. It's kinda impressive. 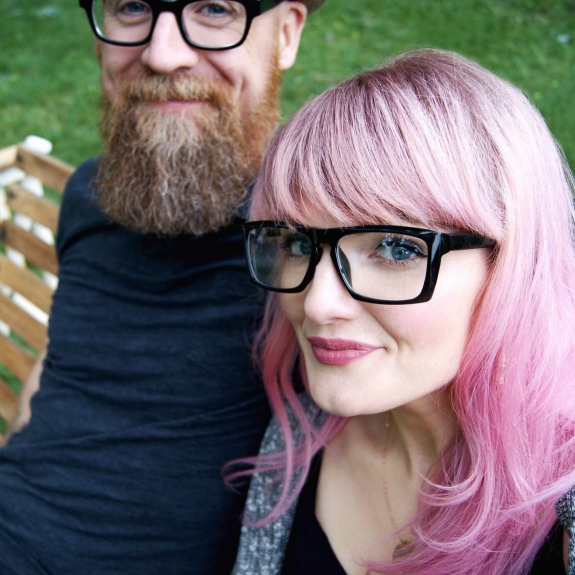 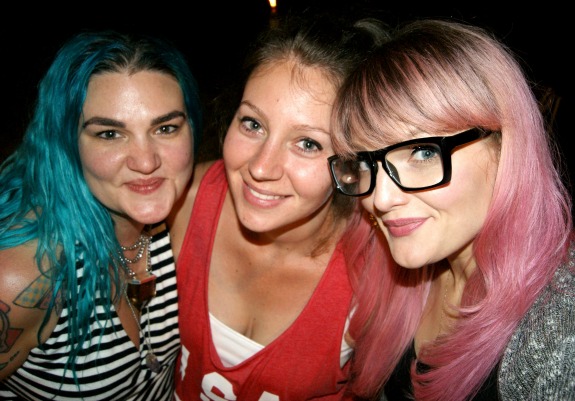 Seriously, by the time I really starting taking pics of everyone it was very late, and very dark in the backyard. So pretty much every shot is of our bright faces against a completely black background.
And oh boy...I just remembered that there were some motion capture attempts that were a disaster and completely hilarious. And you'd see them here if hadn't already deleted them. It was three family members, each holding a sparkler, each one squiggling their sparkler in the dark to make the shape of either U, S, or A. Not a single shot came even close to working out. But that was probably way more fun than if it had worked perfectly!

Ok, I guess that's a brief summary of our July so far. But before I go, two more things...First, I'm posting this on Sunday, which means tonight is episode 2 of "The Night Of" on HBO. Episode 1 was so so good! It's one of those story lines where the web gets more and more tangled each second. So get caught up if you're not watching already.

Second thing...it's another show. This one is one Netflix, so that means you can binge the entire season in one sitting if you feel like it! We LOVE this show. It is like one giant tribute to the very best films from the 1980s. It feels like ET, Goonies, and Stand By Me all in one, and with the amazing music and dark overtones of John Carpenter movies.
We rate this one: A+

Ok, now I'll sign off. Thanks so much again for reading! We hope to be back very soon, and we hope your summer has been awesome so far.