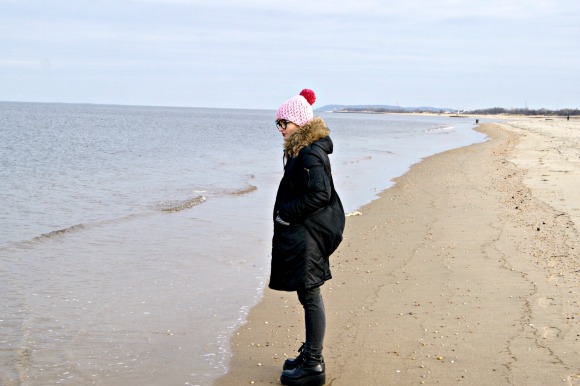 Me and Aaron are always trying to figure out the best ways to spend our time...well not our time really, but our energy. It feels like you're only allotted a certain amount of creative energy each day, and the trick is figuring out when and how that energy works best for you. Example...if we want to do a new painting and we want to organize the studio as well, Aaron will insist that we do the painting first because we'll be able to put our purest, cleanest, brightest energy into it. And then way later, after a long and challenging creative day we can organize the studio without the pressure of the new painting looming over us. Because when you're an artist, your next painting is the most important painting in your life. So every other task on that given day should come second. It seems simple, and you'd think after 20 years of being a working artist you'd have it all figured out...but nope. You're constantly re-writing and reinforcing your "rules".
Which leads me to this...this blog post that I'm writing after a million months of not blogging. This blog is something I really want to do...something that both me and Aaron really want to do. But we get lost in the countless other daily tasks and the blog gets tossed on the remainder pile. And I really wish that it didn't. Because it should be a priority. It's one more extension of our creative selves that we feel is pretty vital.
So we're really trying to get a handle on the good things lately. Like taking time to go into the city, or go to an eatery we've been dying to go to, or just to walk up to the beach after we ship out that day's stack of packages. The beach is like a couple blocks away, and regardless of the current cold temps, it's the perfect place to hit the reset button and focus on a huge expanse of sky and sea and sand, rather than the screen of a handheld device. 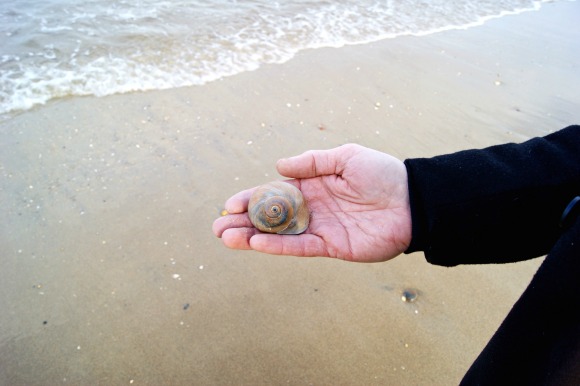 We're not on the ocean, we're on the bayshore. So on calm days there's barely a ripple on the surface of the water and it's as close to silent as a beach can be. 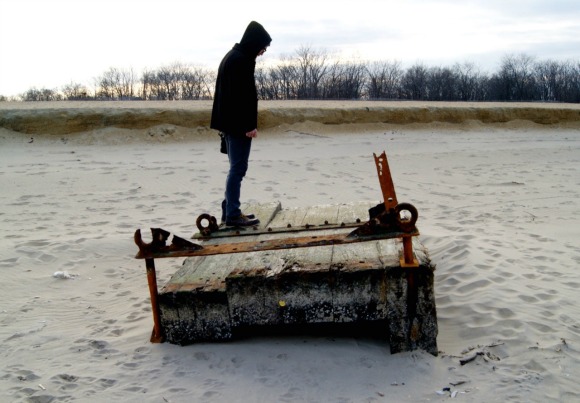 Giant hunks of stuff like this are always washing up on the shore, and you wonder when and how this massive block of wood and metal broke off of whatever it was attached to. (note: when I was typing the previous sentence I said "hey Aar, if I'm talking about stuff washing up on the beach, what word can I use in place of "stuff"? And the bookworm instantly answered "detritus". To which I answered "well, I guess I'm sticking with "stuff."' haha!)
Ok...so we're constantly referencing whatever show we're currently obsessed with. Our fave show right now is Taboo on FX. Sooooo good! It's got Tom Hardy being his usual odd self...stalking around with fierce purpose, brooding, and half the time he's grunting instead of talking. Anyway, the show takes place in the early 1800s when the East India Trading Company pretty much ruled the world. So when we saw this giant slab we of course were like "hey, this thing could've broke off some East India Trading barge like 200 years ago."
Yeah, we're dorks...I never said we weren't. 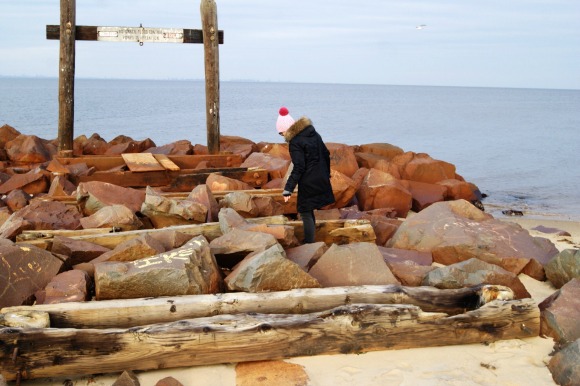 We always walk down to this giant storm drainage pipe because...well because it's there. No other reason really. haha!
ps. giant platform boots aren't meant for rock climbing. 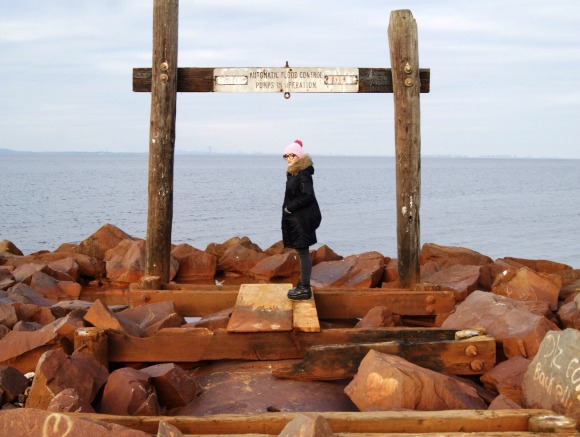 I love the contrast of the bright orange rusted rocks against the wintery blue monochrome beachscape.
Also, it's kinda hard to see in these pics, but directly across the bay is NYC. At night you can see it more distinctly...to the left is Staten Island, in the middle is Manahattan, and on the right you can clearly see the colorful blinking lights of Coney Island.
Our drive to NY takes a little under an hour. 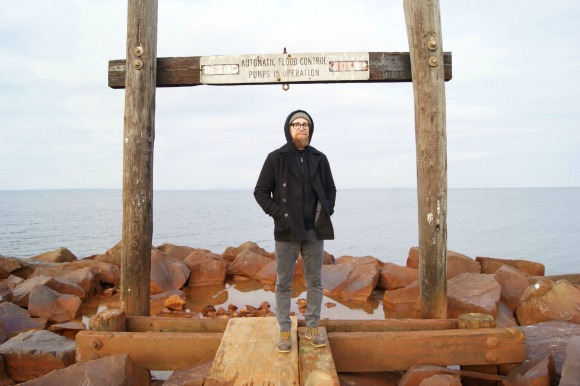 When the tide is high these rocks are almost completely submerged. 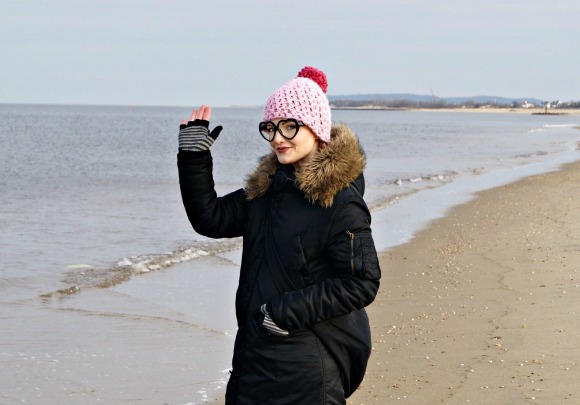 I know our beach isn't the most exciting place in the world, but I don't know what we'd do without it. There have been so many heavy times, stressful times, and also perfectly pleasant times, when just a little walk up on the beach was exactly what we needed that day.
Anyway, to get back to what I was saying about creative energy at the beginning of this post...I'm really gonna try to make this blog one of our priorities. Also we're gonna share lots more food and recipes. We actually just started a second Instagram account that will be dedicated to cooking, eating, health & exercise, etc... This will also give us an excuse to get out more and visit all the vegan food spots we've stalking.
Hopefully we'll have so much more personal interaction with you guys in the coming months. That was sort've our only New Year's resolution...just to get out there more, be more present, and don't let weeks slip by unnoticed. We're going to try to put the good things at the top of the list each day.