A Special Day in NYC 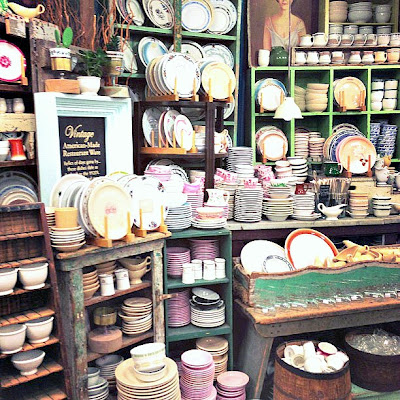 So, the day before yesterday...Thursday, me and Aaron celebrated our 20 year anniversary. Yeah, I know, we're only in our late twenties and yet...bwahahaha! Ok, stop trying to do the math and just trust me.
So yeah, 20 years! And for more than 18 of those we've been pretty much doing exactly what we're doing now...making art and finding our own way. Nary a proper job between us in all that while really. And the rollercoaster life of the self employed artist isn't just one that's self administered. The world at large also plays a big role. And I'd say the latest version is one that has us the most physically isolated. Pretty much 99% of our current artistic career requires us to be at home. So we thought the biggest and best thing we could do for our anniversary was to get out and completely shock our hermetic selves. Yes, a trip into NYC was needed. We used to go into the city on a weekly basis pretty much and now it's been who knows how long. We barely even go to the grocery store.
So we jumped a morning bus and next thing ya know...we've spent 8 plus hours on foot, maybe a hundred and fifty blocks of walking, and our minds absolutely reeling from sensory overload. We revisited some old haunts and established some new ones for future trips.
One of our very first stops was Fishs Eddy, pictured above and directly below. It's one of my favorite places to shop. Vintage plates, cups, china, kitchen implements, glasses, cake stands, just everything you'd ever dream of for your kitcheny obsessions. There was so so much that I wanted but it was very early in the day and we did not want to lug all that dead weight for the remainder of our trip. So we agreed that a future trip in a car would be necessary to do our real shopping. 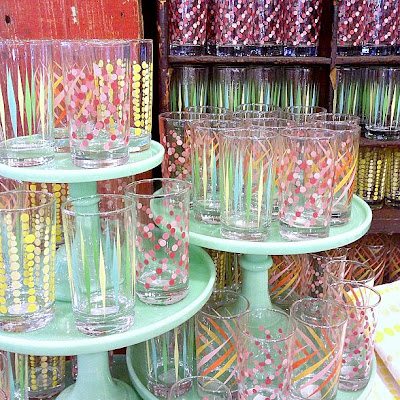 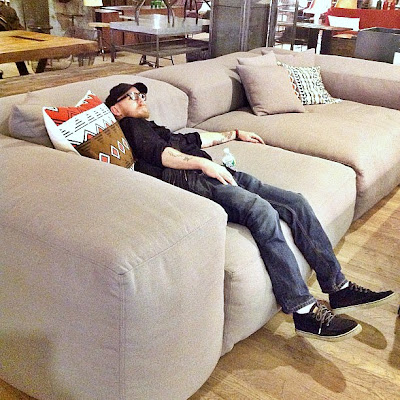 Forever ago we used to go to ABC Carpet and Home and we would stuff ourselves on the visual feast of decor offered up. Well, ABC still has 6 huge floors of retail space, but the endless corridors of authentic peely paint furniture are gone. The giant pieces that looked like they were hoisted by crane out of either crumbling appalachian farmhouses or sprawling hillside victorian manses are only sweet memories now. And we count ourselves lucky to have had the chance to stroll those aisles of antiquity for a few years. But ABC is still impressive. You can still get a pretty accurate pulse read of current decor trends and the spectrum is wide. Above you'll see Aaron on a sofa that could have only been built for giants. This thing was sorta in the real manly section...everything very hunting lodge-y and gentleman's club-y and Swiss hotel-y. And of course there were lots of books serving as decor. Including some giant columns that could support a roof. Below I snapped a pic of our resident bibliophile sneaking a glance around to see if he could slide a few volumes out without the ceiling caving in. But if he were crushed under a pile of books I do believe this would be a happy end for him. 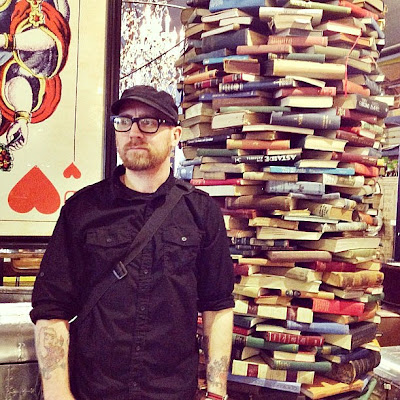 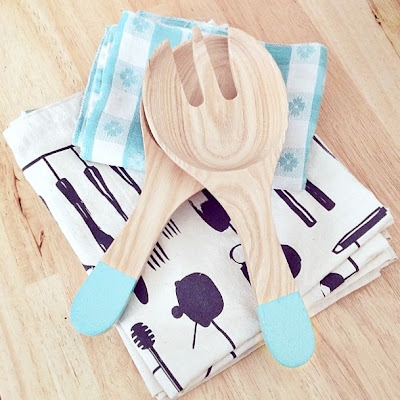 We also had some actual shopping to do on this outing of ours. My little bro Walt's b-day was the following day and of course, Mother's Day. So we hit up the big Crate and Barrel that's right on Houston. And besides getting Walt like the ultimate smoothie maker, we also grabbed some stuff for us that would make kitchen life a bit easier, including these chunky little wood salad servers above. We then customized them at home with some aqua paint color blocking. And yeah, we left Crate and Barrel with about 40 pounds worth of stuff which Aaron could feel in his trapezii the following day! 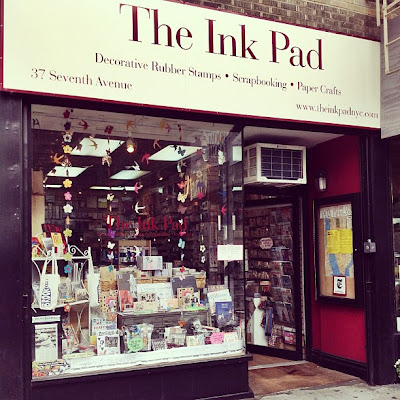 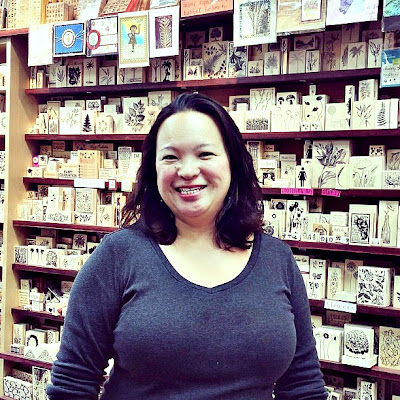 Our travels then took us to one of our predetermined destinations for the day. The Ink Pad...which we can't believe we've never visited before. It's in a great neighborhood in the West Village and despite it's size they've got so so much product. We were lucky enough to visit on a day when both the owner Anna, seen above, and the manager Barbara were there. Barbara recognized us from the blog and we all got to talking. And me especially because just prior I had revived my soul with an amazeballs iced coffee from La Colombe and me and caffeine are a tricky combo. I will tell you my life story in under 7 minutes with footnotes, glossary, index, and acknowledgements. Anyway, we tentatively planned for us to teach a class or two at The Ink Pad! How cool is that?! I will let you all know when dates are firmed up...I hope some of you local yokels can attend! 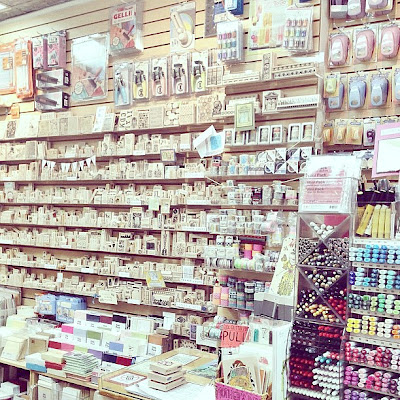 Any direction you turn this is what you'll see. 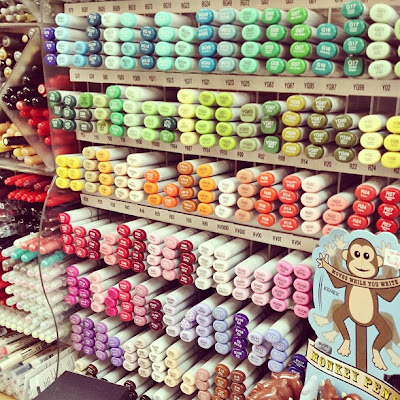 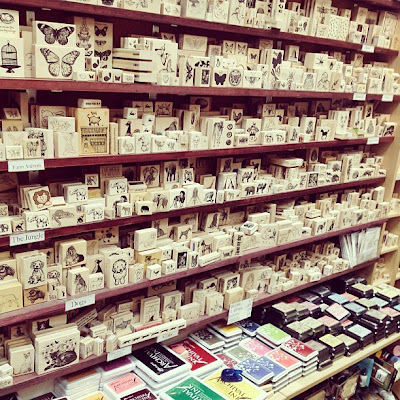 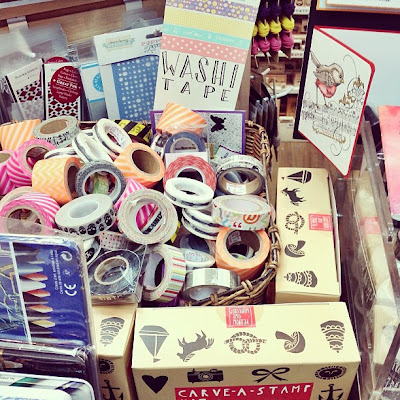 Washi tape galore...stencils, tools and whatnot. 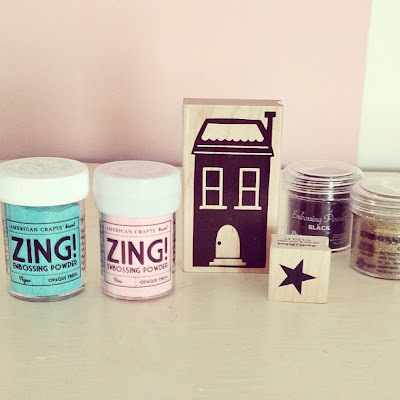 Directly above and below are some things we took home for ourselves! 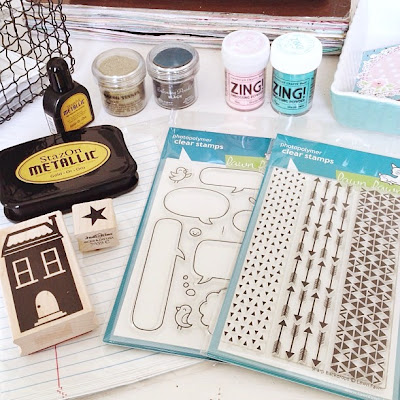 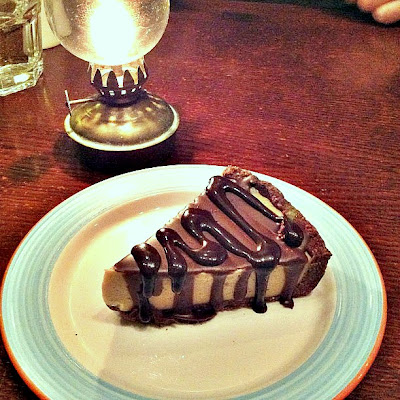 And lastly, after torturing our heels for hours and hours we finally cooled them at a restaurant we had been dying to try. Rockin Raw, which is down between Bleecker and Houston, is so so good. It's a raw food vegan place with a Peruvian / Creole bent. The food was unbelievably delicious. I apologize for the lack of food pics...the lighting was so dim. After stuffing ourselves for like two hours the waiter brought a candle over and then I was at least able to snap a pic of dessert. Chocolate Lucuma Cheesecake...and being raw and vegan only makes stuff taste like 1000 times better. So take a glance at it and then add 999 points to your imagined taste scale...surriously.

Ok, we've officially reanimated the city stalking monsters in both of us and I think there will be many more visits in the near future. I'm still reeling and loving the energy we brought home with us. Thanks for revisiting the trip with me!