We hit the pause button. 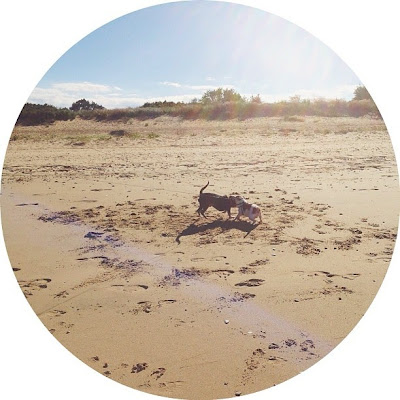 Hello Hello. We've been working all weekend on "the project" but were actually able to hit that coveted pause button for about an hour. We used the break time to take a walk up to the beach with the pups.  I wish you could get a sense of all the crazed energy that was being expelled in the pic above. It was hilarious, and it turns out that Carlos and Jack needed a break just as badly as we did. They were running at each other like lunatic gladiators...body blocks and all. A ten foot by ten foot square of pristinely smooth sand was ravaged by their tiny paws and ended up looking like some all terrain vehicles tore it up. Seeing them have a good time makes us so happy. 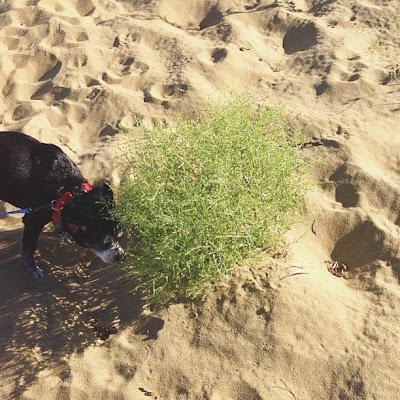 It was a slightly cooler day, and it was a weekday, so besides a lone fisherman, we were the only souls up on the beach.
Above you can see Carlos checking out a beach tumbleweed. Well at this point this is still just a weed...it's in it's pre-tumbling state. When it grows big and turns brown it will break from its root and live up to it's name. Had a slight adventure on the walk home...it's a good thing that its only a few blocks. As we crossed the street my flip flop decided to bite the dust. The bottom tore clean off...which maybe wouldn't be so bad, except that these were platform flip flops. So I was left with just a thin piece of foam attached to the strap part. This meant that I had to majorly hobble...of course I wasn't gonna go barefoot on the streets. And it just so happened to be the hour when everyone gets off work and the streets were full of traffic. I'm not that keen on being the hobbling spectacle. Oh well.


A little instavid of our break. Such a clear day. We could see the buildings of NYC perfectly, Coney Island, the bridges. So nice. Jack is soaking it all in. 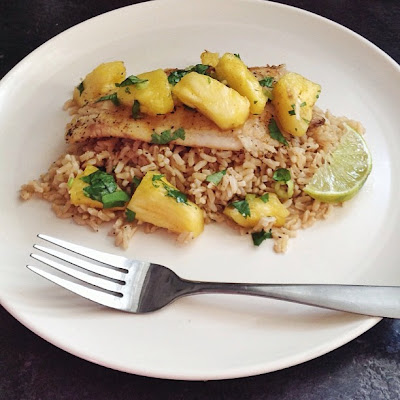 And when we got home we cooked up a quick meal that was deeelish. This was one of those totally made up thrown together recipes, but man it was so good. We had a pineapple that we didn't want to go to waste, it was just sitting there on our counter uncut. So we decided to cut it up and make a meal that would use up a great deal of it. We first made a quick marinade for our tilapia, using pineapple juice, a bit of honey, lime juice, dash of salt and pepper, some cayenne, and fresh cilantro. And then we made a drop dead Pineapple Salsa!
So we grilled the marinated tilapia, served it over a seasoned brown rice, and topped it with our Pineapple Salsa. It was really really yummy. We are looking forward to trying some new recipes over the next few weeks and hope to share some with you soon! Here's a quick rundown of the Pineapple Salsa...

In a large bowl, combine your pineapple, cilantro, lime juice, brown sugar, cayenne pepper and honey. Mix well.  It's that easy!
Serve over your tilapia and rice!

What have you been cooking/eating lately? Any recipes you think we'd love? We'd love to hear about it!

Ok, and also this...yes, This! One of my absolute favorite movies. Yep. I kid you not. I remember the first time I saw it. A very long time ago, one afternoon while cleaning my room it came on tv. I swear I was glued to the screen. It's just this guy, Dennis Weaver, driving through the desert, and the trouble begins, and escalates and escalates... It's directed by a very young Steven Spielberg. For the longest time I have been checking Netflix for it, hoping I could stream it. But nope. Anyway, the other night I just looked on Youtube for the trailer...just to give myself a tease...and wouldn't ya know...somebody uploaded the film in it's entirety!! To say that I was psyched is an understatement. I believe I was just saying YES! YES! over and over for the first 20 mins of the movie.

Never would I have thought that as a grown woman I'd be saying that one of my all time favorite movie's would fit this description:

"A business commuter is pursued and terrorized by a malevolent driver of a massive tractor-trailer."

Yes, that's the full description of the film, no more, no less...and that's a pretty spot-on description. ha!

Okie doke...back to work. I hope you guys enjoy the rest of your weekend! Breaking Bad tonight!! YES!