Creeps on a Plane, Birthday Cake in Bed, John Denver's doppelganger, and Sweethearts on the Homefront! 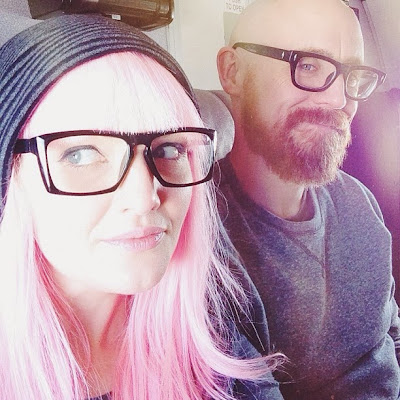 It's Monday afternoon, and as is sorta par for the course after a whirlwind trip...we feel a bit sluggish. Well, bodily we do...but there is no lack of wind in our emotional sails. All the fun we had in Atlanta at the Sweethearts on the Homefront event, and just thinking about everything that we did and saw, the old friends and new friends. As recluses this sort of thing is like a mega shock to the system. The above pic is entitled "creeps on a plane". We look like creeps because we're tired and claustrophobic in one of those little pond jumper planes. But before we get to our flight...let's recap a bit. 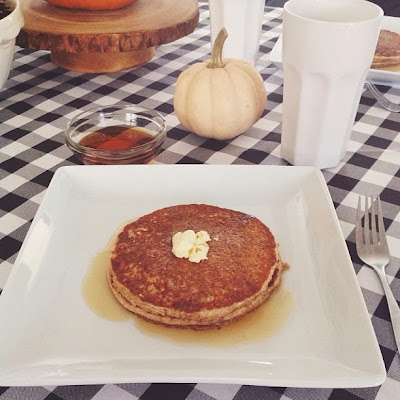 It was my birthday on Tuesday and we knew that breaking away to do any celebrating would not be possible. We still had so much to get done for the trip. At least some Birthday pancakes were a great way to start the day. Multigrain with flax seed, with vanilla, and pumpkin pie spices...they were really good! Very Fall-ish. 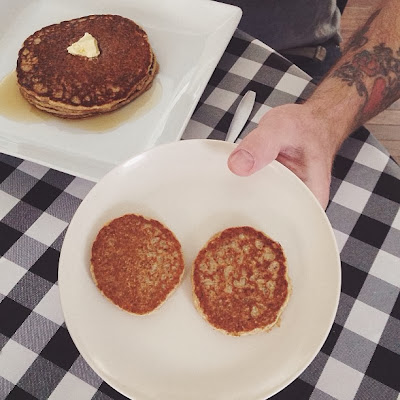 Even the pups got their own minis...or as some folks call em...silver dollars! They were quite little...this pic may be deceiving. That plate is small.
The pups loved them! Jack is crazy for sweet things or cakey things. Even more so then say...a turkey leg or a steak. Not that we offer him those...we can mainly tell his tastes by what wakes him up and gets him off his big puffy chair. You could whip up a cloud of meat smoke (yes, shudder to think) and he won't stir a bit. But go ahead and walk over to the couch carrying a muffin or cookie or something...and Jack will bolt upright from his slumber, leap to the floor and run over to wait at your feet for his share of the sweet. 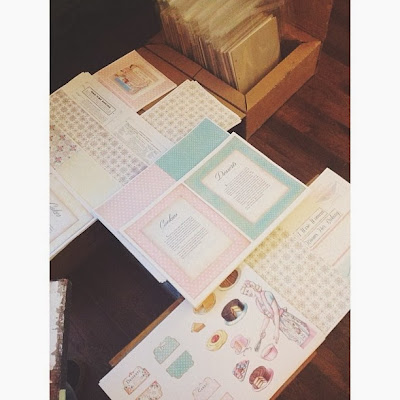 So yeah, on my birthday, which was 48 hours from our departure time, we did lots of sorting and organizing and packing kits up. 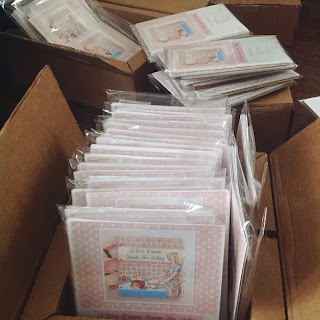 This is actually one of our favorite things to do. We love the idea of a project being broken down into easy to follow steps, with all of the elements, and decorative bits contained in a neatly packed sleeve. It's better than tv dinners, microwave popcorn, and astronaut ice cream rolled in one. Maybe not as cool as George Jetson's dinner in pill form...but awesome. Art that's just sitting there waiting to be released and made into something. We were so excited to see and hear what the gals in class thought of the project. It's always pins and needles time when you're packing up kits. 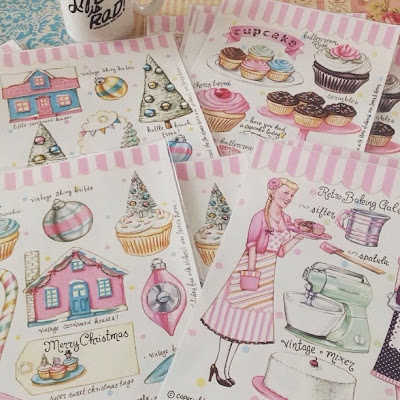 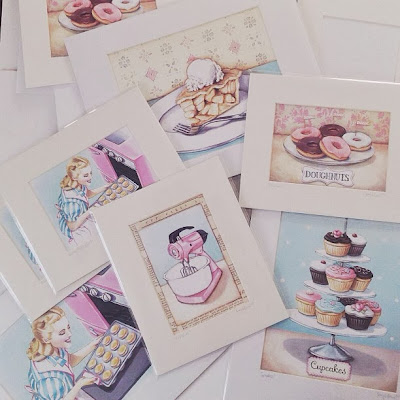 We knew that we couldn't bring a massive amount of items for the vendor fair, being that we were taking everything on the plane with us and the kits alone took up an entire big suitcase. So we mostly went with smaller prints...our best sellers and classics, and sticker sheets that the gals could use in their own projects and art journals. 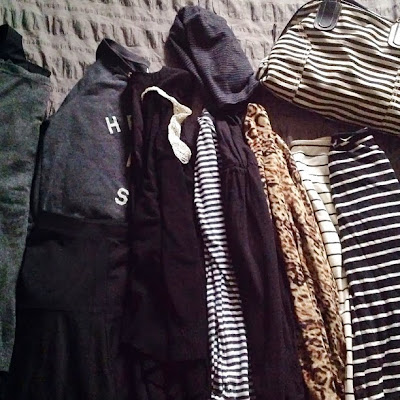 Umm...yes... this happens to be what my wardrobe consists of... black, grey, black, cream/black, leopard, and more black. 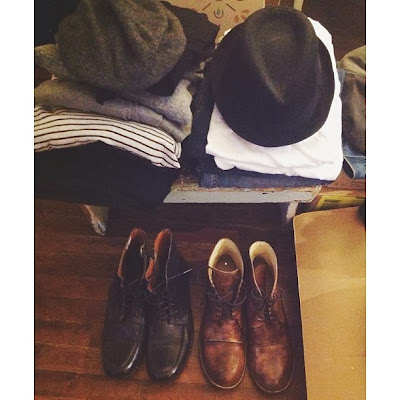 You can pretty much say the same for Aaron, but he likes to throw in a dose of perfectly worn and weathered browns...leather that bears the patina of age...like the old books he collects. 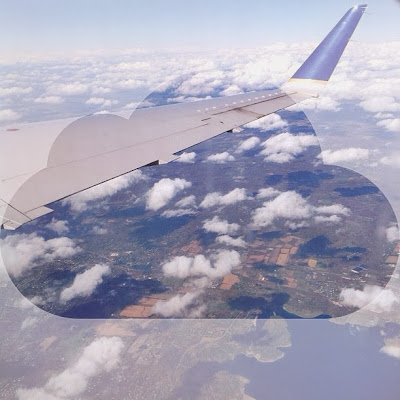 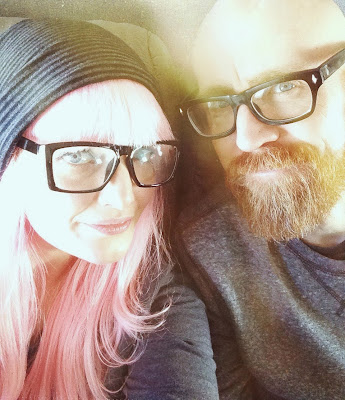 Aar always gives me the window seat but he looks out of it more than I do. When the plane takes off or lands and banks way to the right he'll look out and I'll see his eyeballs get wide...and I just say to him "don't tell me what you see." As I said above, it was a tiny plane...50 passengers I think. Aaron isn't afraid of flying but hates small spaces. But really, the flight wasn't so bad. Atlanta is fairly close...flight time is under two hours...that means the flight attendant serves us our seltzer but we don't get to eat the neato snack box with the hummus in it. And wait, I feel like this should be a long story, but I'll keep it short...our flight attendant...yes, there was only one. Anyway, he was a very unique looking individual. He had a sort of Beatles mop top, with the sideburns and all, and the beatnik turtleneck thing going on as well. He looked like he could play a minor character in a 60's James Bond film. So, after marveling at him for the entire flight, his full face of pancake make-up (yeah, a little weird, but I guess a flight attendant is partial show biz) and being amazed by his baritone delivery over the p.a. system...well, just as me and Aar are disembarking, I decide to tell the guy this: "I simply must tell you...you just look like you should be in movies." And this was his reply: "I AM...I played John Denver in the Lifetime movie."
Ok, at this point you had to pick up my jaw from the floor...but I kept it cool. As soon as I got online later I googled this guy the best I could. I had no name...just the John Denver thing. Anyway...I couldn't find a stitch. But I don't think he was fibbing. Maybe he's actually in the Lifetime movie that stars Chad Lowe as John Denver. Maybe the flight attendant dude plays wide angle shots of Mr. Denver...when he's on stage and such. But if the dude was lying...maybe the story is even better. Plus, holy cow is this guy tempting fate...playing John Denver and spending his workdays on airplanes!!!?? 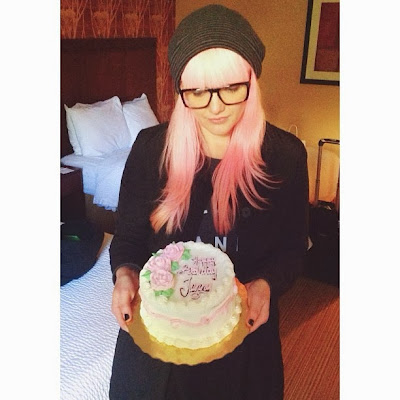 Ok, arriving at the hotel and having the guy at the desk hand you a swag bag of goodies is plenty for me to feel special. But when you walk into your hotel room and there is a birthday cake sitting on the desk...then you feel like a million bucks. I instantly teared up and said "Aar, wait til you see what's on the desk." Rosalyn is maybe the most thoughtful gal you'll meet. She spared no expense and made us feel so welcome. She kept saying how generous we were for doing this and I seriously couldn't agree...she was the generous one. Offering to get these two recluses out into the world and in front of a room full of like minded artist/crafters is a gigantic gift. We are forever grateful to Rosalyn and Jenn. 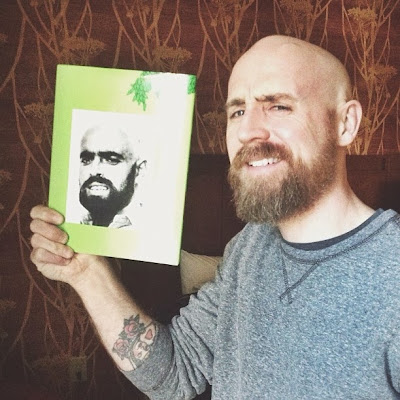 And yes, there was also a gift for Aaron. The Giving Tree is one of his all time favorites and don't tell anyone...but he cries every time he reads it. Being that the tree is obviously the boy's mom. And yeah, as for the photo above...was Rosalyn secretly trying to tell Aaron something? Immediately he got in the mirror and struck his best Shel Silverstein pose, then walked across the room holding the facial expression so that I could snap a pic. 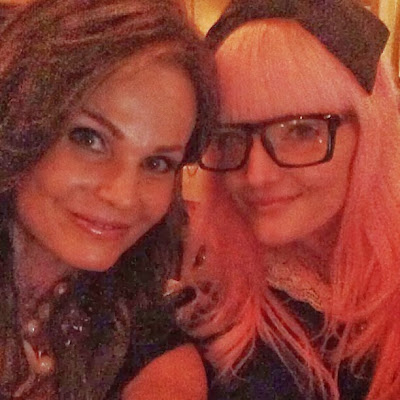 So yeah, the night we arrived was for meeting and greeting. We all went out to dinner and laughed it up. Amazing to meet gals for the first time who we feel we have known intimately for so long. Of course by now, it feels like me and Aaron and the above Jenn Hayslip, have spent lots and lots of time together. She is the easiest person to like. You can't not like her...trust me. We met for the first time in 2007 and have not fell out of touch since. It was way too dark in the restaurant, otherwise I'd have snapped more pics. 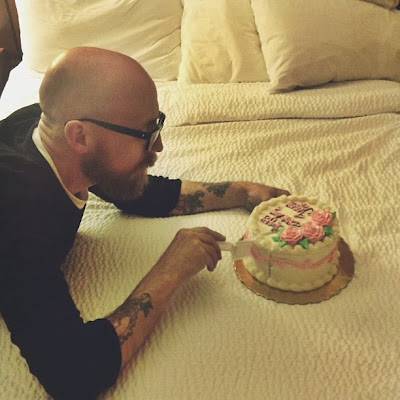 And finally, after waking in darkness, flying on a tiny plane, and meeting a ton of awesome people, we were absolutely exhausted and headed back to our room. And this is when Aaron, sans plates, sans forks, laid the birthday cake on the bed, cut a big slice and pushed it into his mouth all in one shot. If you follow our eating habits here on the blog you'll know that this isn't our normal behavior...but we were on the road...why not party a little?

I will be blogging the second leg of our Atlanta trip tomorrow. Which will feature the Country Living Fair....Ho Lee Cow! Best fair I've been to of this sort...or any sort. When this thing shows up on the calendar...do yourself a favor and GO! You will not be disappointed. Can't wait to share the deets!
xo, til tomorrow, Jenny & Aaron