Meet the newest member of the family...Lieutentant Dan! 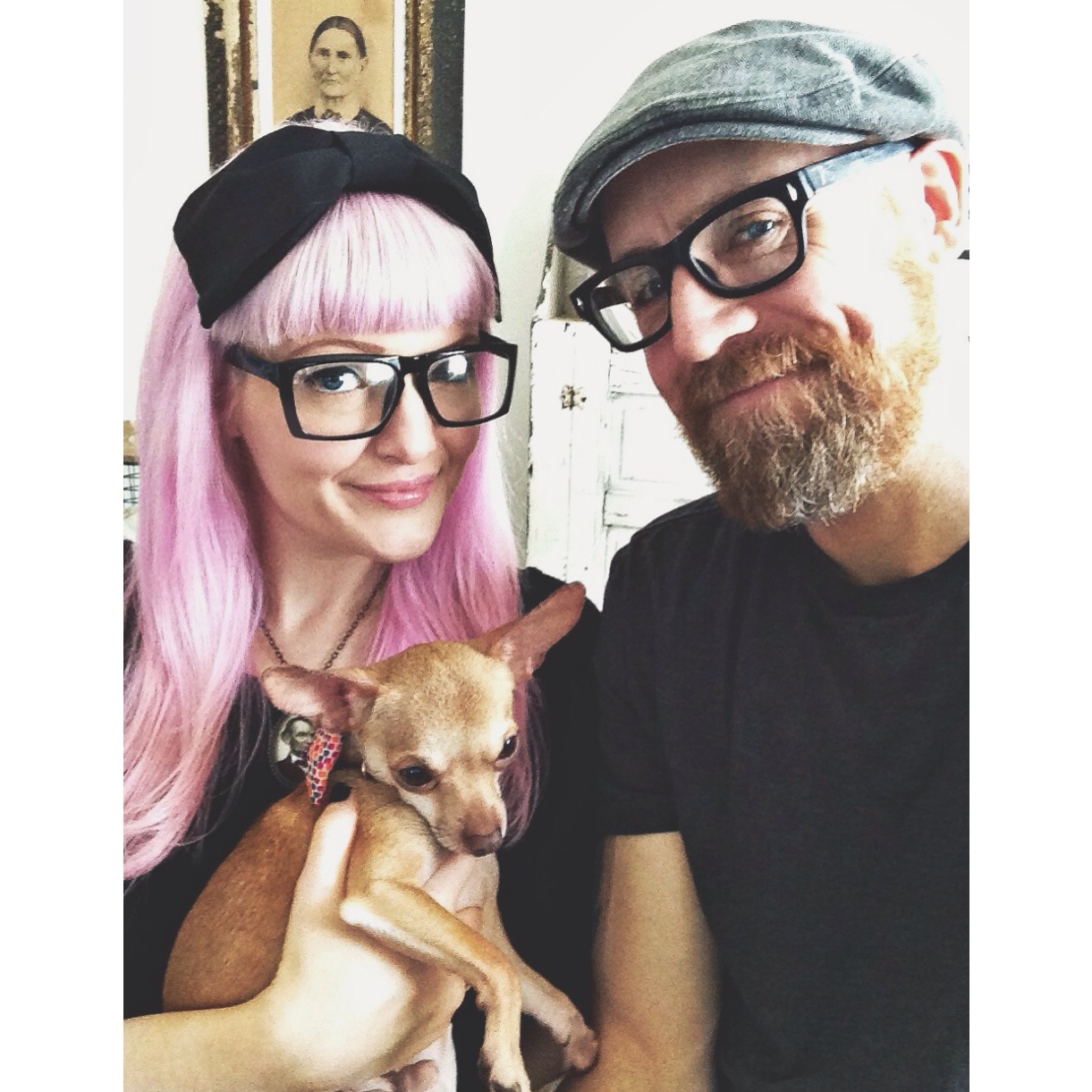 Ladies and Gentleman...introducing Lieutenant Dan! I'm really going to try to keep this introduction brief since I know that Lieutenant Dan will probably pop up on your screens way more than you can tolerate in the future. I know we will be OVERSHARING on all social media platforms when it comes to this little guy.
He came to us the way all very special things should come to you...sprinkled with a bit of fate, chance, and magic.
As chronic dog lovers, me and Aaron always keep tabs on and donate to A Place To Bark, which is an animal rescue founded by our friend Bernie Berlin. We know Bernie through the art community. She's a great artist, instructor, and published author, but lately A Place To Bark has taken up nearly every minute of her time. She's located outside of Nashville TN, and her rescue is responsible for saving thousands of lives in that area...yes, thousands. On a weekly basis she will go to four different animal control shelters and take as many dogs as she can that are mere hours away from being euthanized. These are regular ol' lovable pups who were unwanted, abused, abandoned, etc... And she tries to take the ones who may be the hardest to adopt. Big dogs, black dogs, bully breeds, and pups with issues that are easily solved with a little bit of tlc. She takes them all to A Place To Bark, and there they get vet care, they get cleaned up, trained, socialized, and in the end they are 100% ADOPTABLE. Seriously, check out any number of videos on A Place To Bark's Facebook page and you'll see dozens of super well behaved pups, sharing food, playing, tails wagging like crazy. No aggression, no fear, just lovey dovey dogs. And many of these dogs were once cowering in a corner somewhere. 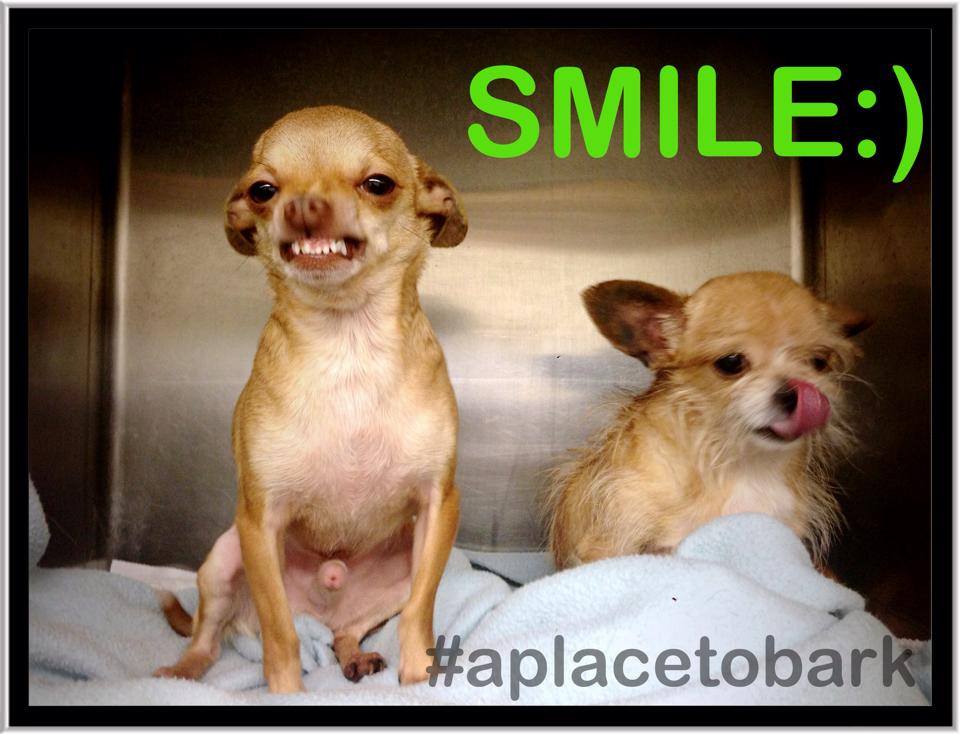 Ok, just after the loss of our Little Jack, me and Aaron were probably looking at the A Place To Bark facebook page a little more often than usual. We weren't looking for a new dog. We were just finding comfort in looking at these dogs who were given a second chance at life. So, we then came across the above pic with the insanely smiling tiny Chihuahua. It stopped us in our tracks because we weren't used to seeing Chihuahuas at A Place To Bark. They rarely come through, but lately Bernie has been taking in a lot more of them (maybe inspired by this duo of Chi fanatics?!) Ok, so the next day, I got a message from Bernie. She had heard about our little Jack and said that she had someone there at A Place To Bark that we should meet. I was sorta overcome with emotion because I wasn't ready yet to consider getting a new pup. I told her as much, and when she wrote back she indicated exactly which pup she'd like us to meet. It was that crazy smiling one we had seen the day before! 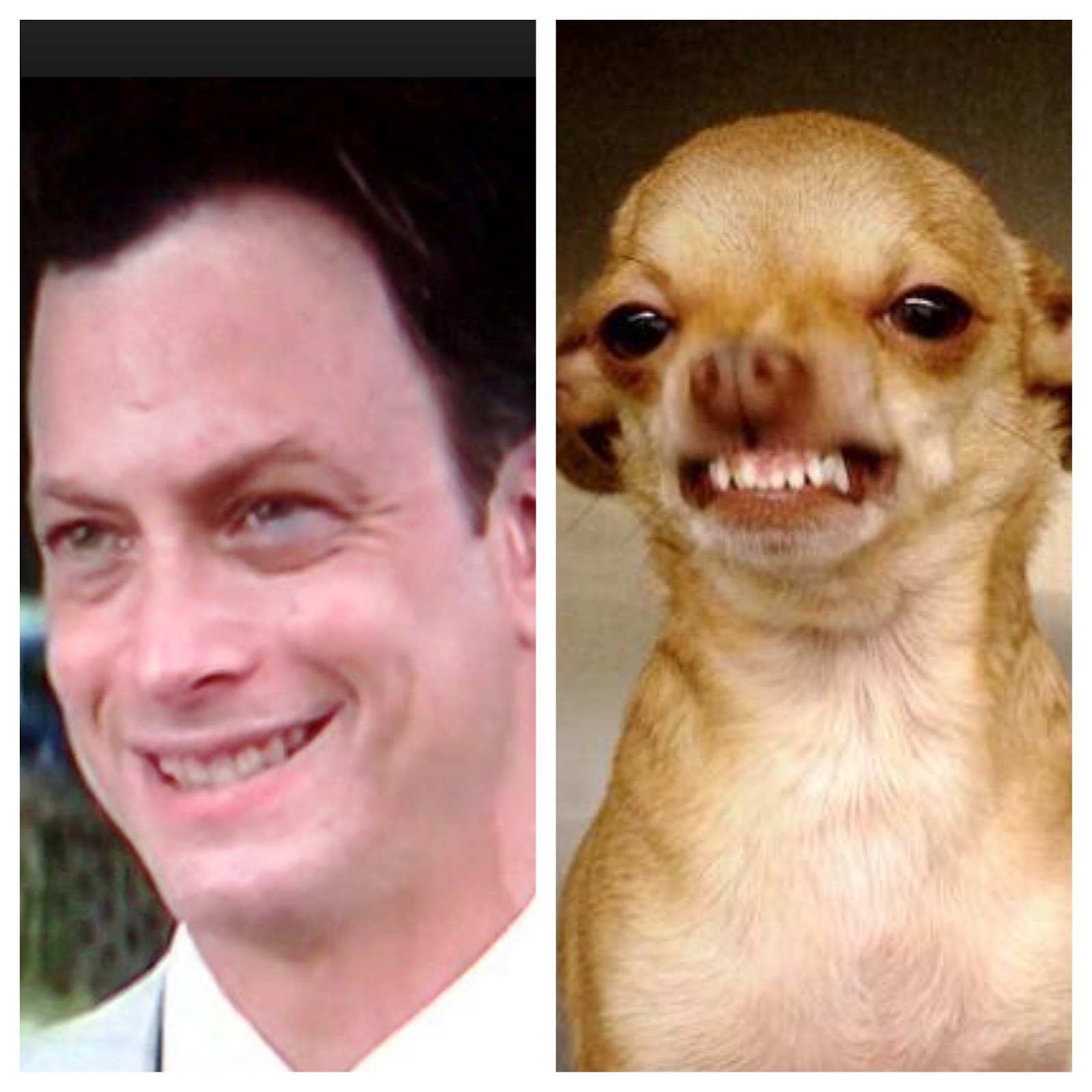 She said his name was Lieutenant Dan and that he smiled like that whenever you fooled around with him. Bernie has a way of talking to Dan that makes him smile like that instantly! Right away we loved the name Lt. Dan. We are not even big Forrest Gump fans...we just thought the name was perfect for the little guy. We couldn't figure out exactly why he had the name though. Unlike the real Lt. Dan, this pup has all of his legs. But then I did come across this shot of Gary Sinise as Lieutenant Dan, and the smiles definitely look similar! ha!
Ok, so at this point, the smiling pic was the only one we saw, and we were totally in love. Oh sure, he looks crazy in the pic...but we love crazy looking things. 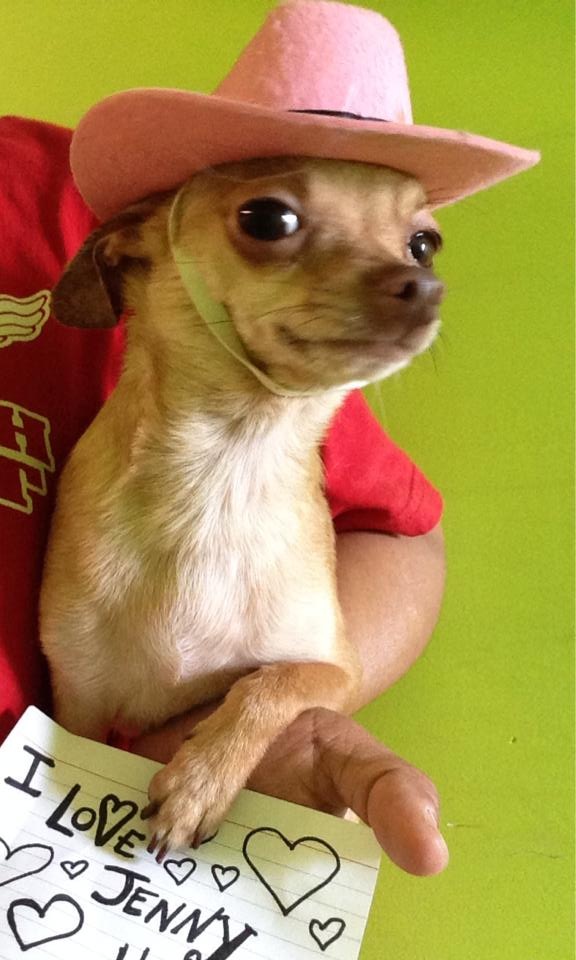 
And then...Bernie followed up with this pic. Total opposite personality. He looks so calm and docile in his pink cowboy hat! Me and Aar swooned. I then told Bernie that we would want him but we had no idea how and when we'd get to Tennessee. Bernie said not to worry, she loves the little guy, and she'll hold onto him until we figure it out somehow.
Two months go by and we are frequently messaging with Bernie. She sent us a few videos of Dan, which we watched over and over. And then we get word from Bernie that she has a meeting in New Jersey...of all places! She says she's taking Dan on the plane so that he can come meet us! And then, at the last minute we find out that Bernie's meeting is in Red Bank, which is like 15 minutes away, we used to live there and we had a retail shop there. Crazy!
﻿ 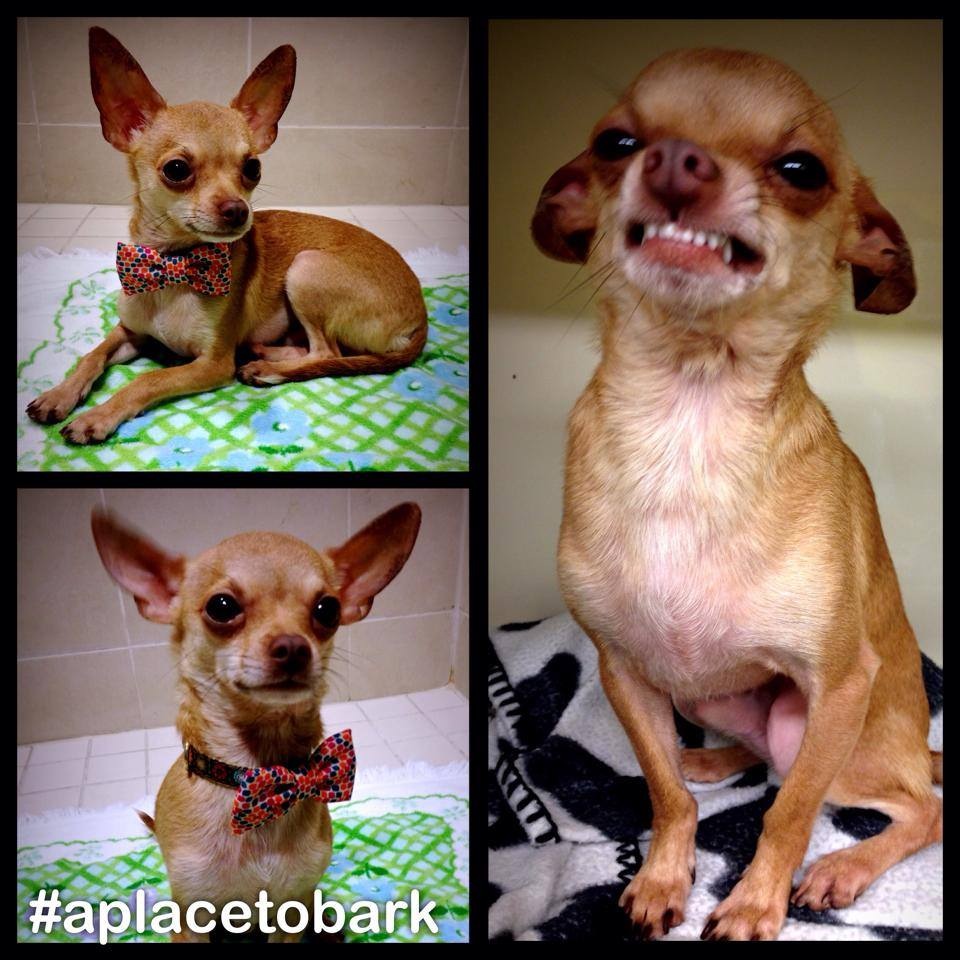 Like I said, everything felt fateful and magic. It was almost four years ago to the day that we first met our little Jack. We picked him up on 4th of July weekend. And now here we were, picking up Lt. Dan.
Here's the thing...you can't ever replace your beloved pup that passed. But you can fill the hole in your heart...or to say it better...you can take that surplus of love that you had for your departed pup, and give it to another pup who really really needs it. And who needs love more than a rescue dog?
Here's the brief background on Lt. Dan. He was a stray, found wandering in some parking lot, nearly starved, bad ear infections that made all of the skin and hair shed from those adorable ears. But then he was taken to A Place To Bark, got nourished, had his ear infections treated, and he was shown love. Bernie regularly rubbed coconut oil on his ears to heal them and promote hair regrowth. Dan now has a nice gingery peach fuzz and zero health issues. Every night at A Place To Bark he got to snuggle with his girlfriend Mouse, who you can see in the above smile :) pic. She still needs a home, but needs special circumstances...she has lingering trust issues with humans. Make sure to check out A Place To Bark to see all the pups needing a good home. ﻿
﻿ 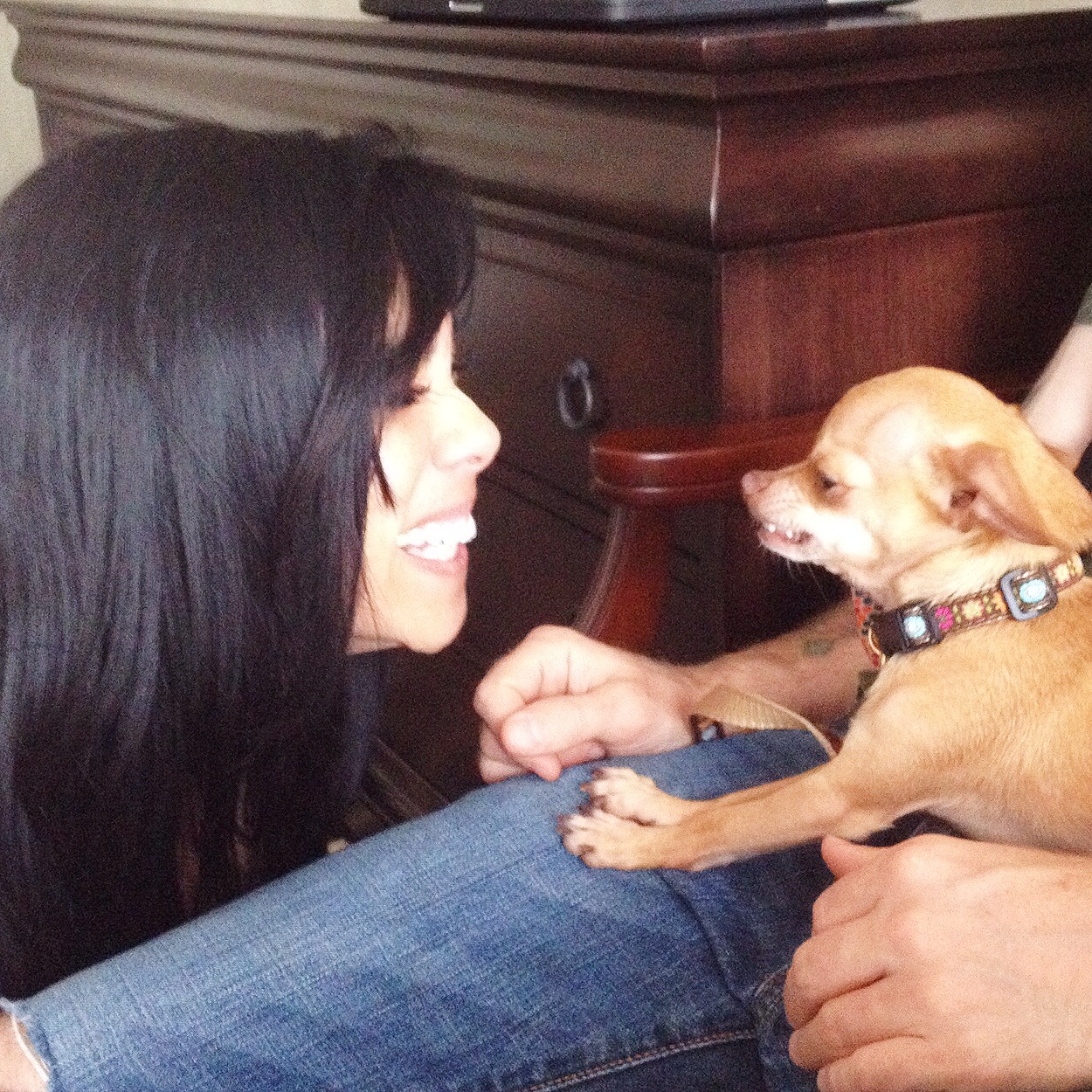 So, we went to Red Bank and finally met Lt. Dan! He was every bit as sweet as we had expected...even more so actually. Bernie got him to smile for us right away! Aaron held him for at least a couple hours while we hung out with Bernie and her man...who is an awesome guy. Non stop joking with Jeff.
Seriously, within no time at all Lt. Dan was bonded with Aaron. We put Dan down to pee on a tree and right away he ran back to Aaron to be held again. Our time hanging out with Bernie was definitely too brief...but we will make sure to get together lots more so that she can keep in touch with Dan. ﻿ 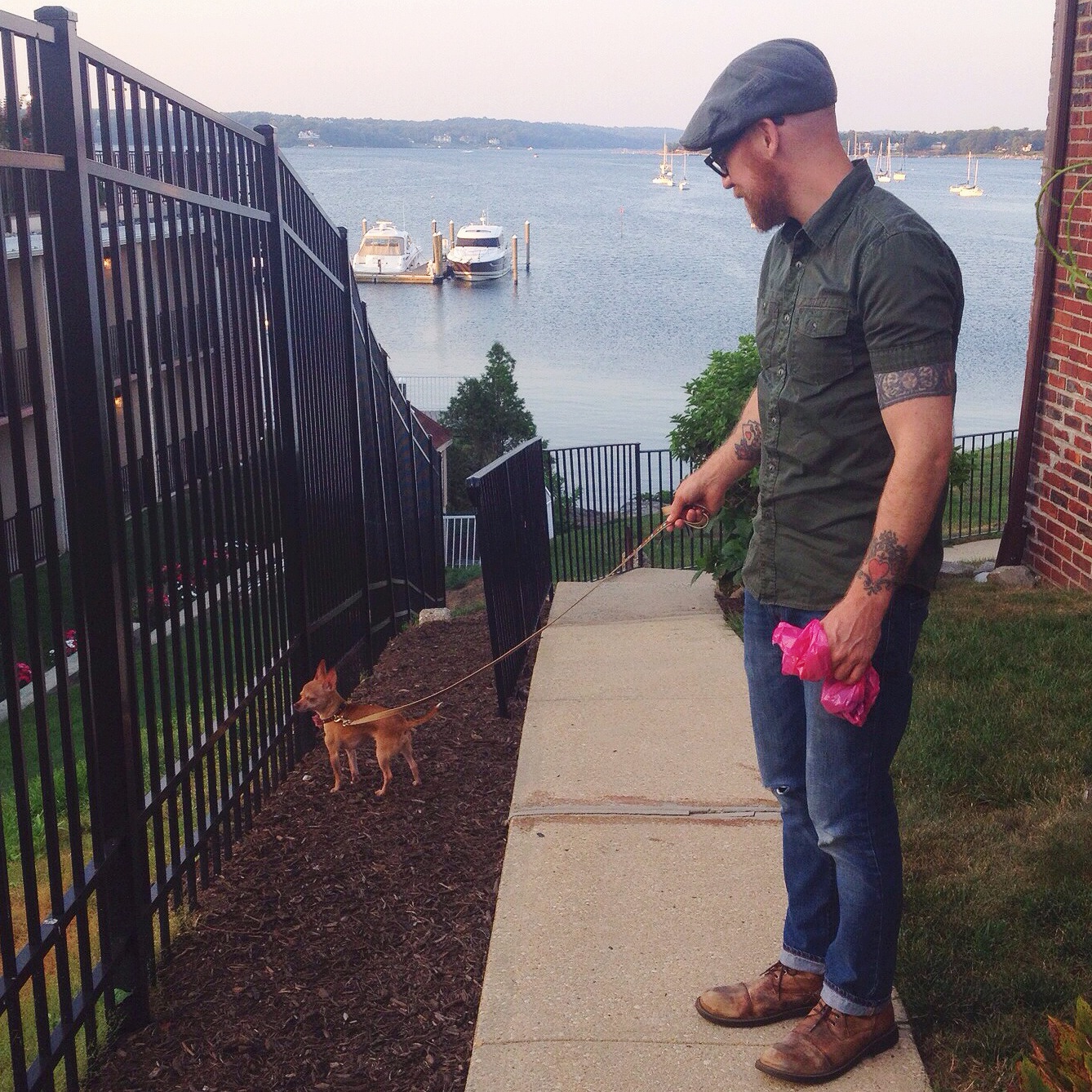 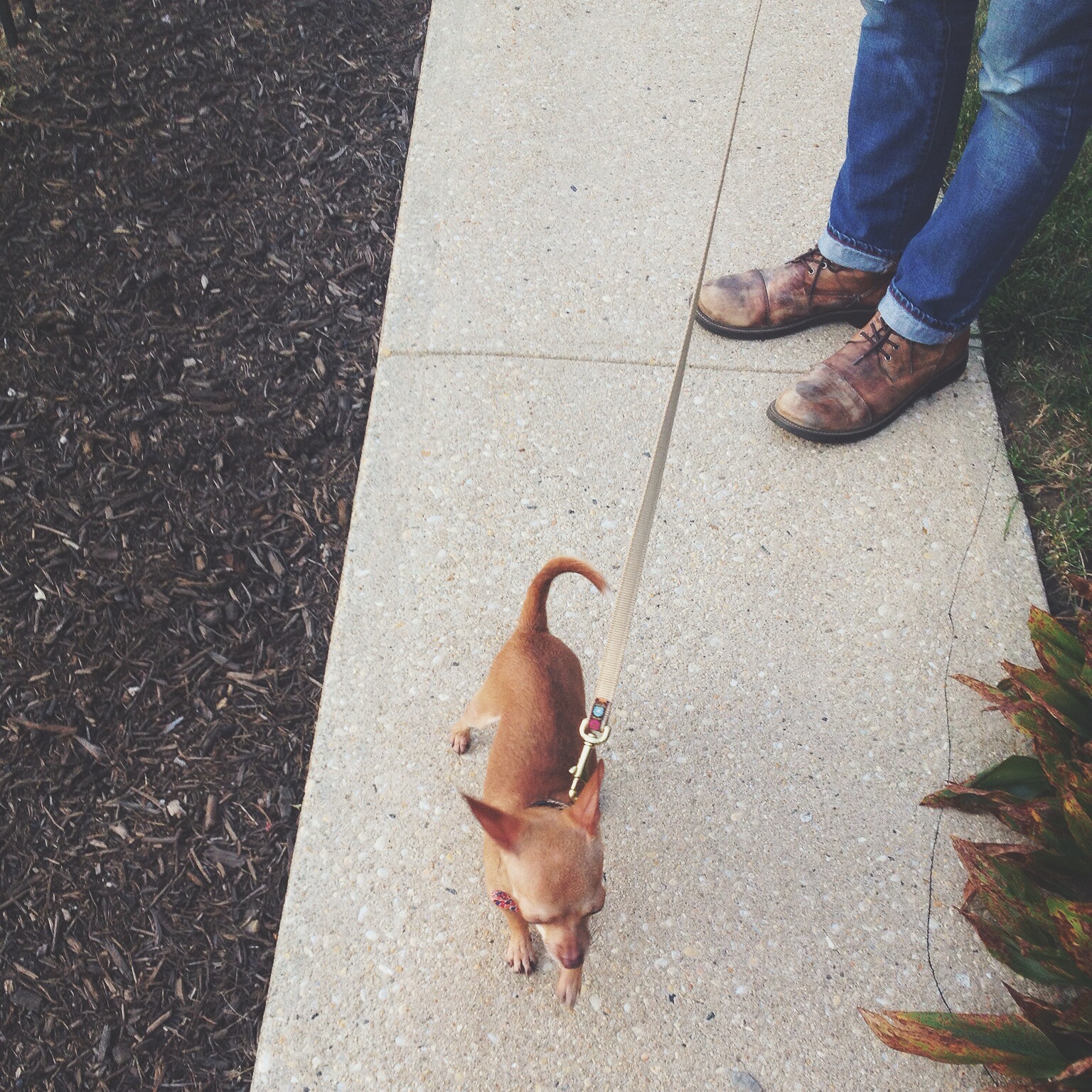 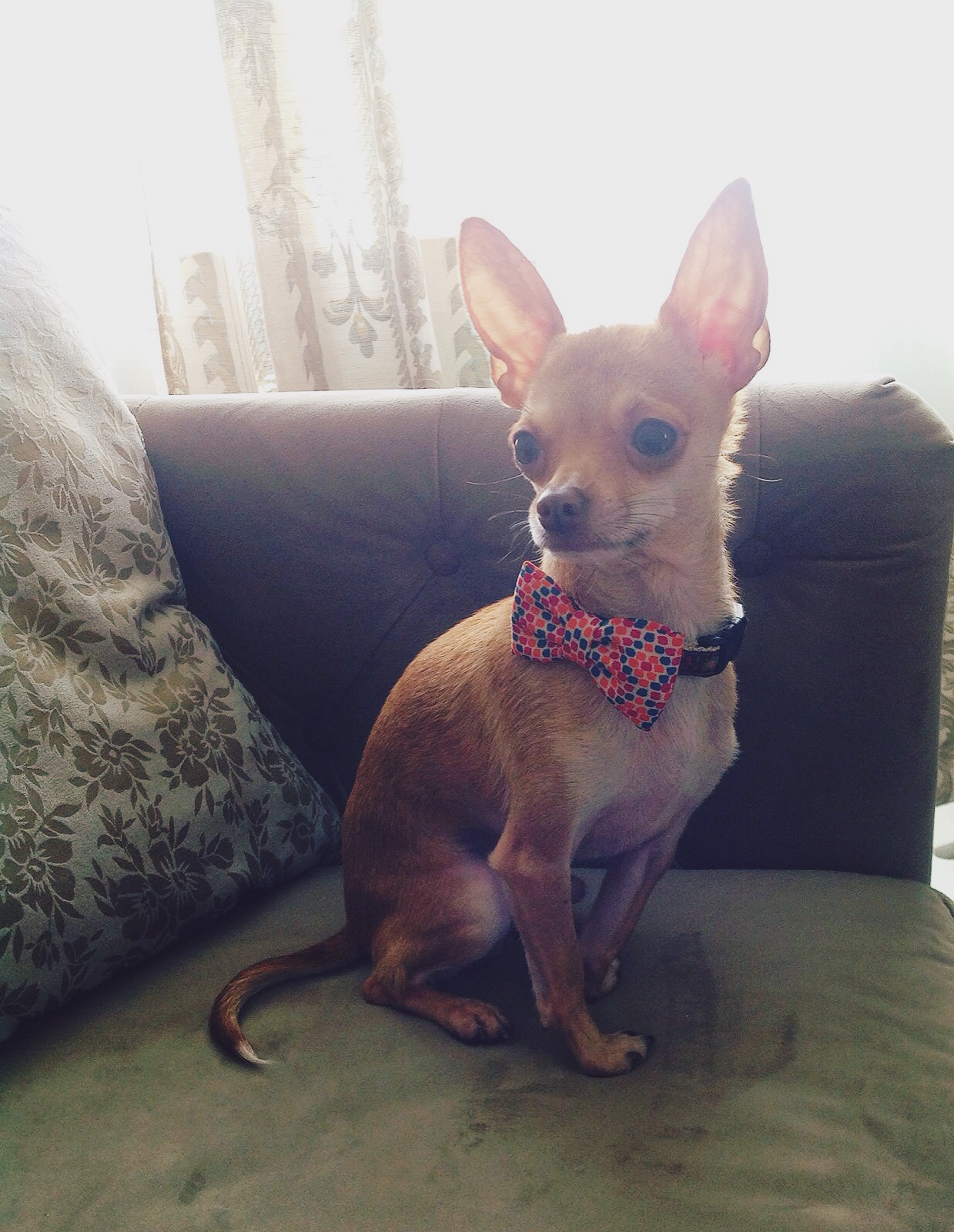 When we got him home Carlos went nuts. Even though we had Carlos for a long time before we got Jack and it was just the three of us, he became very used to having a brother, and had missed Jack terribly when he passed. So with a new little guy showing up here Carlos was pretty much overcome with excitement. He just kept circling the little guy and whining and panting, and leading him around outside. They were instantly sharing treats, and laying in the same doggy bed together.
Carlos sleeps down at the foot of our bed, and when we had Jack we figured out right away that he and Carlos couldn't both sleep with us in the bed. There was a weird territorial thing and they'd growl at each other. So Jack slept in a doggy bed on the floor right next to Aar's side of the bed. It worked no problem. They both seemed comforted by the separation. So last night we were going to do the same with Lt. Dan. We set him up with some blankets in a little doggy bed beside the bed, and he was nestled in there contently. But as soon as we switched off the light, he shot like a rocket into our bed! And it's a fairly high jump to make for the little guy! He wormed right under the blankets and curled up next to Aaron. Carlos came over for a brief sniff, but then went to sleep in his own spot. No problems all night. We hope it stays that way. The behavior that pups have in the initial days together does not always remain the same. 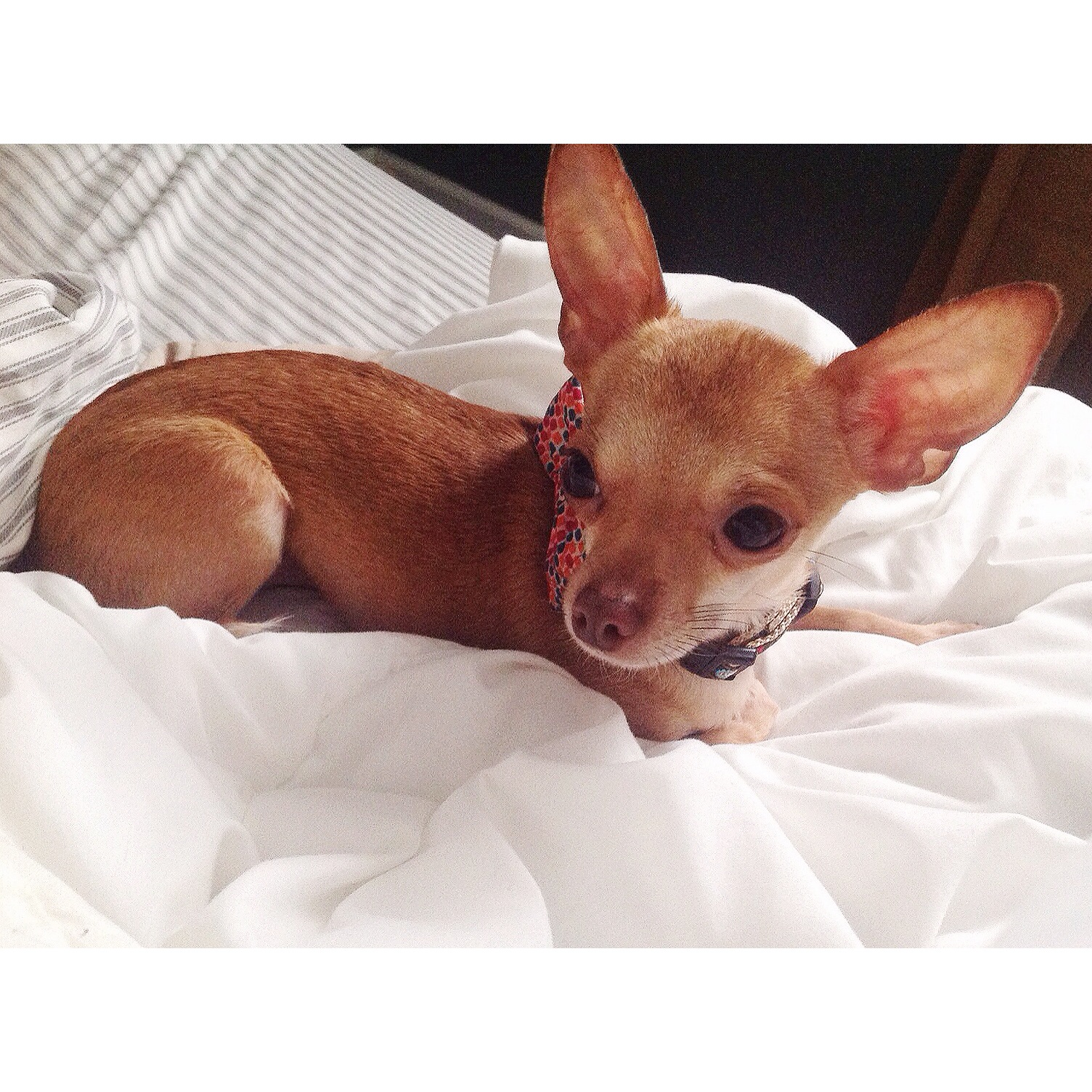 In the morning, we woke up, peeled back the blankets and revealed this adorable face. Enough to melt our hearts. He went out for his morning pee easy peasey...got a long drink when he came in, and he and Carlos settled down in their respective beds as we sat in the livingroom like we do every morning...Aaron with his coffee, me with my water with lemon, (coffee might give me a heart attack...fo' real) A little later he stood around with Carlos in the kitchen to watch Aaron make us a smoothie. He seriously is acting right at home. 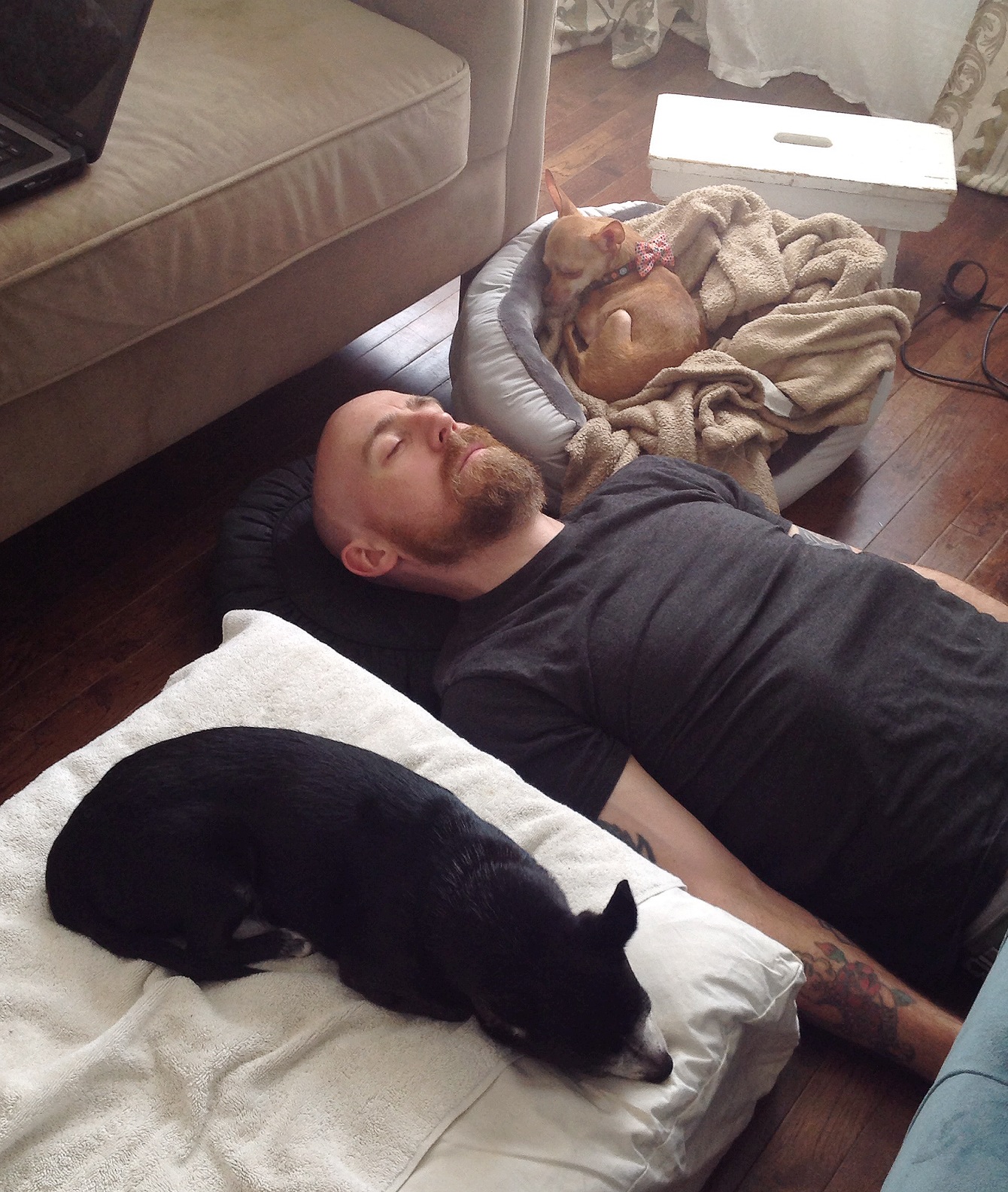 By midday Aaron needed to shut his eyes for a while. Neither of us slept because we were checking on the little guy all night long. The two pups seemed to need a nap too as you can see. Yeah, and by the way...Aaron can nap anywhere, anyhow...he'd lay on concrete and not have problem catching some winks. 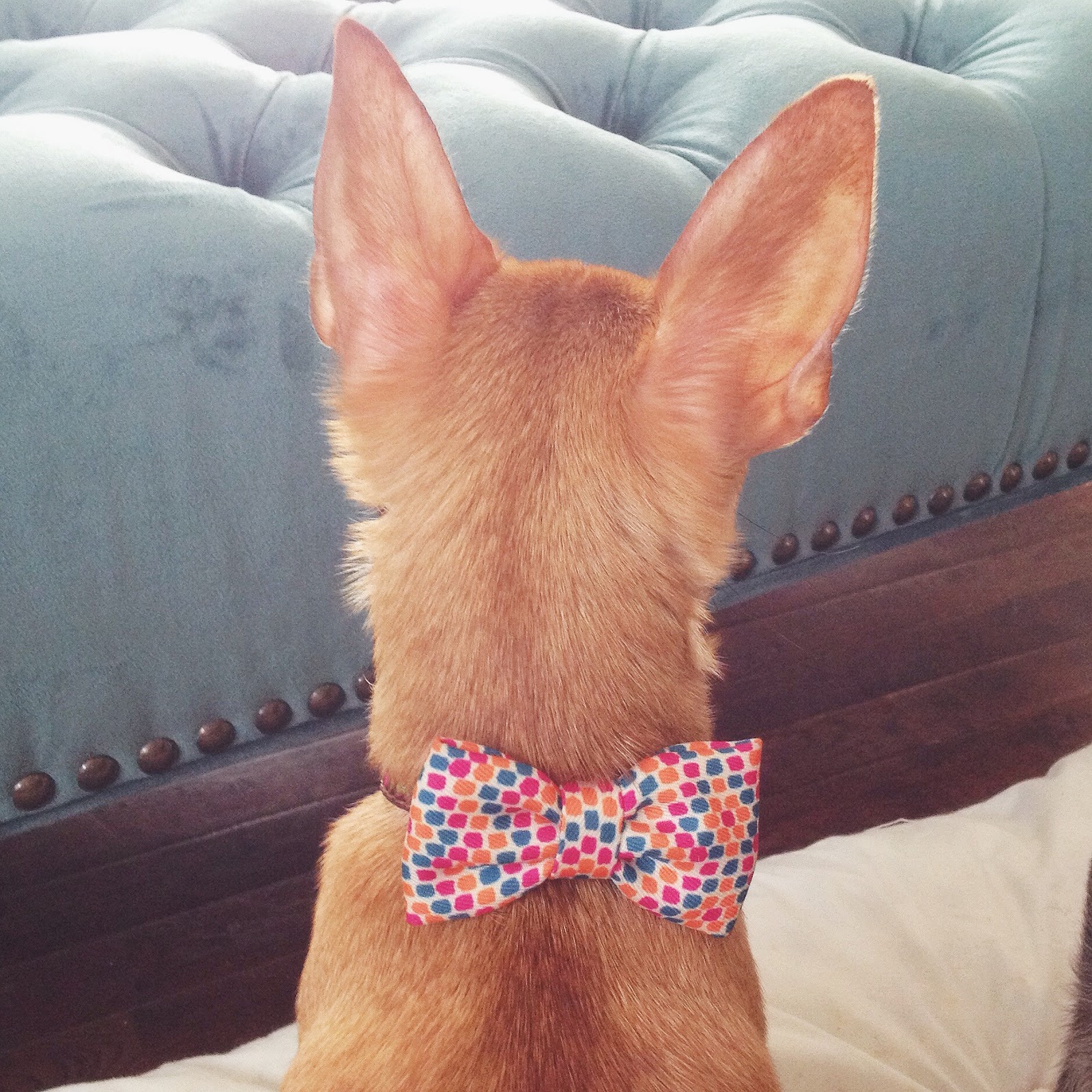 We are so thankful for Lieutenant Dan. We're thankful to Bernie Berlin for being the patron saint of recued animals, we're thankful that she thought of us in our time of grief, we're thankful for her having business to take care of in Jersey, and we're thankful to our little Jack for smiling down over the whole process. A little note on that...my brother Walt picked us up from Red Bank after we got Lt. Dan...on the drive home Walt says "I have to make a stop...I need to pick up something for Bruno. (his dog)" So he pulls into the vet parking lot but they're closed. We just pause in front briefly, but the brief pause is enough. This is the same vet where we said goodbye to our little Jack. And now, nearly two months to the day we're here in the same exact spot holding Lt. Dan in our arms for the first time. Lives may pass, but the love never does. We get to give it all to another life who needs it.
We urge anyone who is able, to rescue a pup...or to rescue many many pups by donating to A Place To Bark. Bernie works tirelessly with two employees and a couple volunteers. Their resources are meager, but their love is huge and should be celebrated.
Adopt don't shop.
Love you guys,
xoxo, Jenny, Aaron, Carlos, & Lieutenant Dan﻿
Labels: a place to bark Bernie berlin lieutenant dan