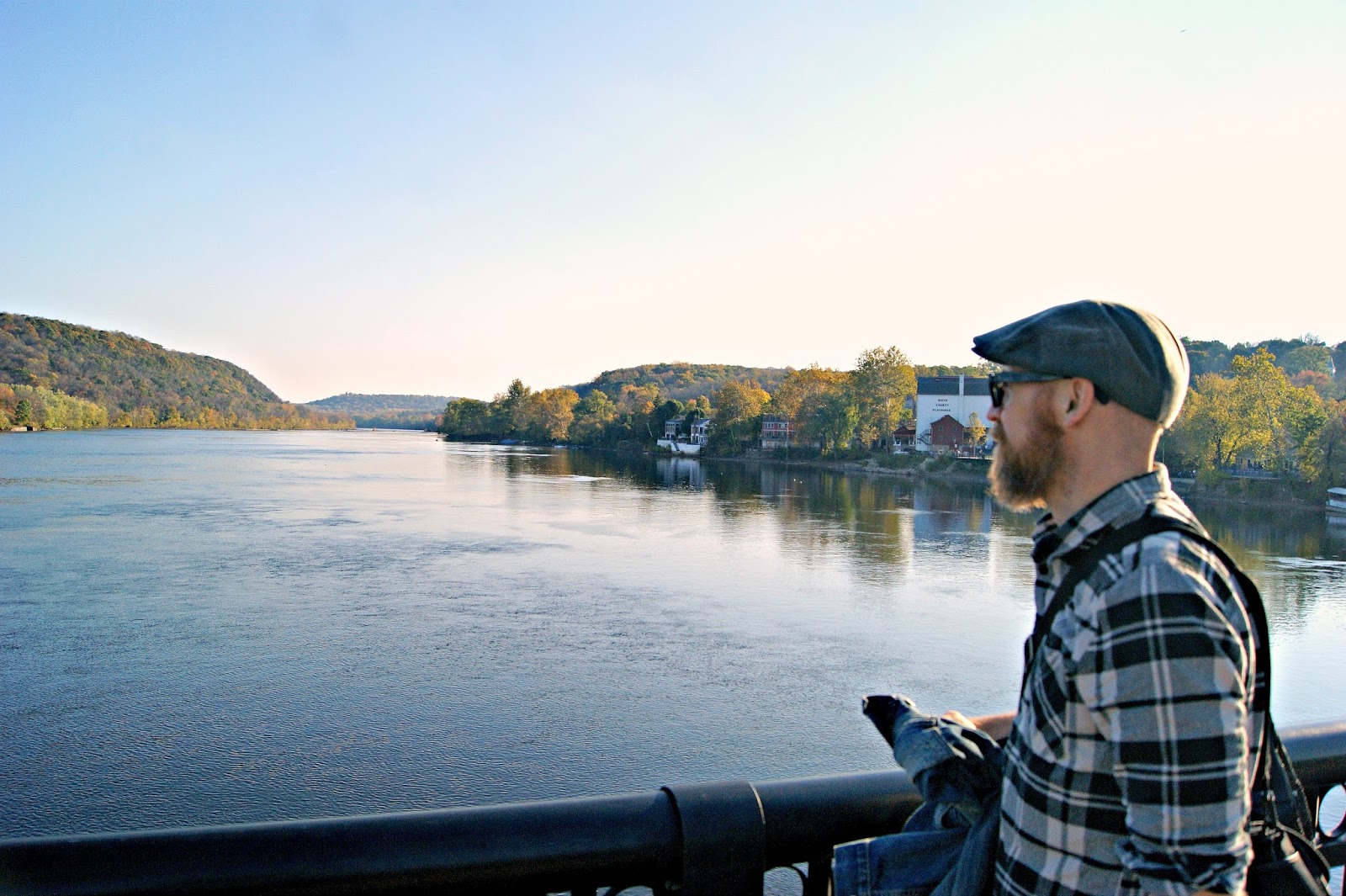 After having the worst possible weather ever on my actual birthday, I think I was owed a sunny weekend. But yesterday's weather was way better than I ever could have wished for. Mid to high 60s, sunny, calm, and picture perfect. Seriously, it was the ultimate Fall day! I was so so happy to be able have a do-over day! And in my absolute favorite birthday place…Lambertville, NJ and New Hope, PA. Two very old towns that are situated on either side of the Delaware River…and the bridge over is such a pleasant walk. Lambertville has an older, more historic feel…tons of antique shops. And New Hope is more touristy...chock full of little gift shops and eateries…lots of hippie types and tons of bikers.
The five of us went…Me, Aaron, my brother Walt, his girl Val, and Lt. Dan. And if you are wondering why Carlos didn't come…being around crowds gets him all sorts of excited…like way too excited. The little old man that he is...he'd much rather stay home curled up in his bed watching the Weather Channel. 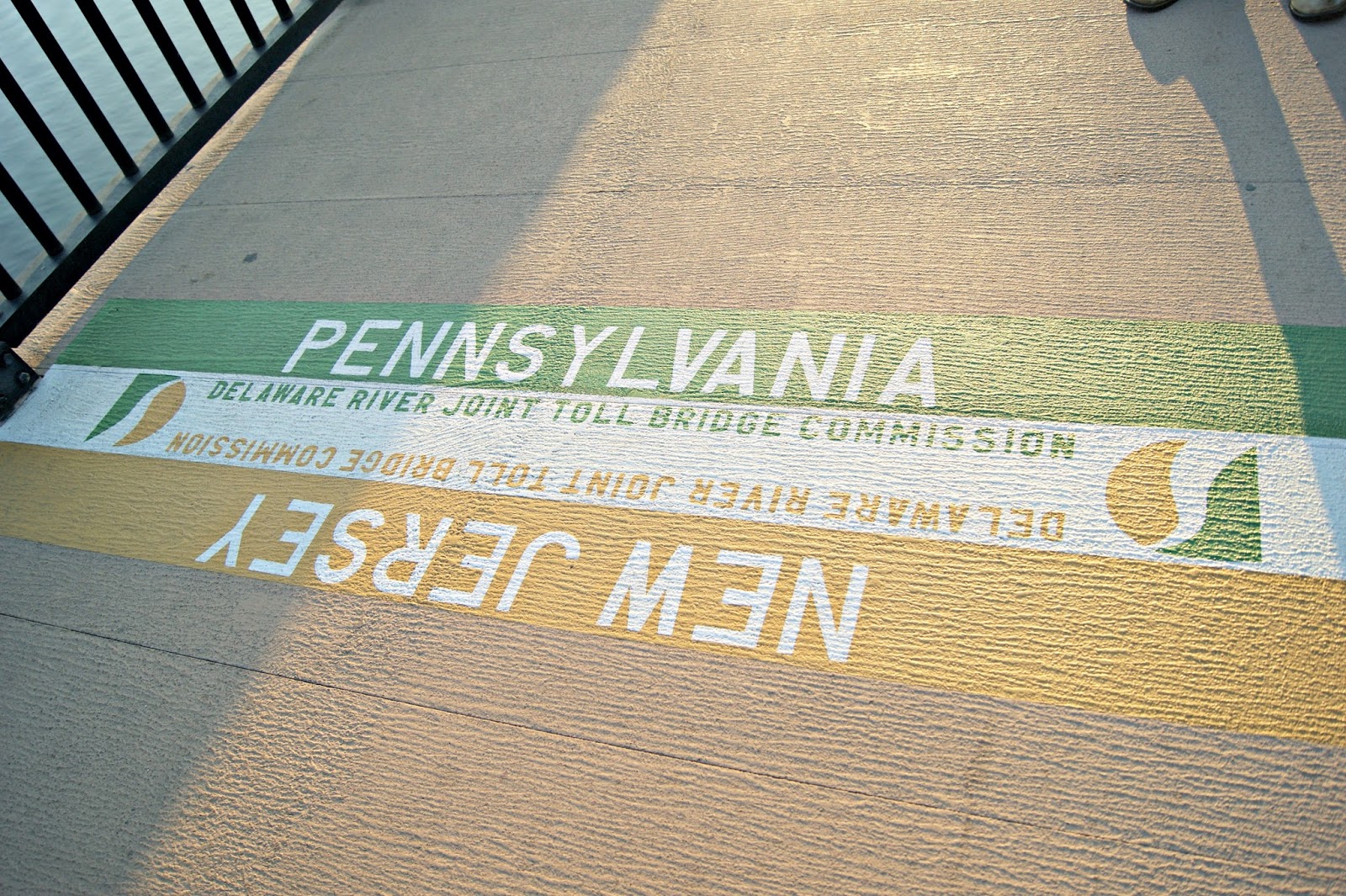 It's my ultimate birthday place, and I'm so happy that Walt and Val made time to go with us. We hadn't been there in a few years, so it was a thrill to be back. This is a shot of the midpoint of the historic bridge between the towns. 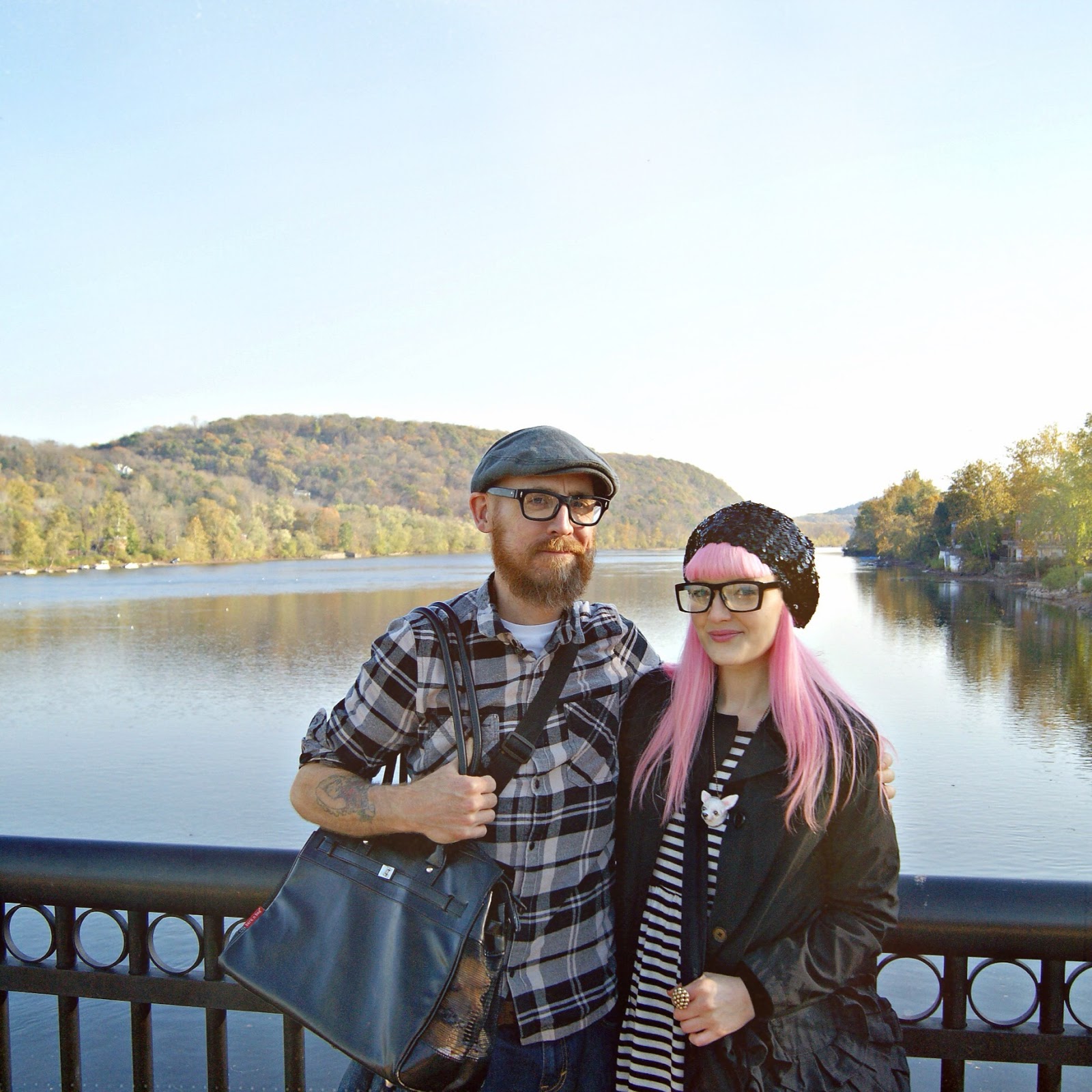 We had to stop on the bridge for pics with the incredible view. Yeah, I've got a derpy look on my face…I was squinting from the sun, and I'm pretty sure Walt snapped this just as I finished saying something. There were too many folks walking across to stop traffic in order to snap another pic.
But you have to look closely at this pic…you can see inside Aaron's "purse". Get a load of that tiny little face in there! Yep…it's Lt. Dan. 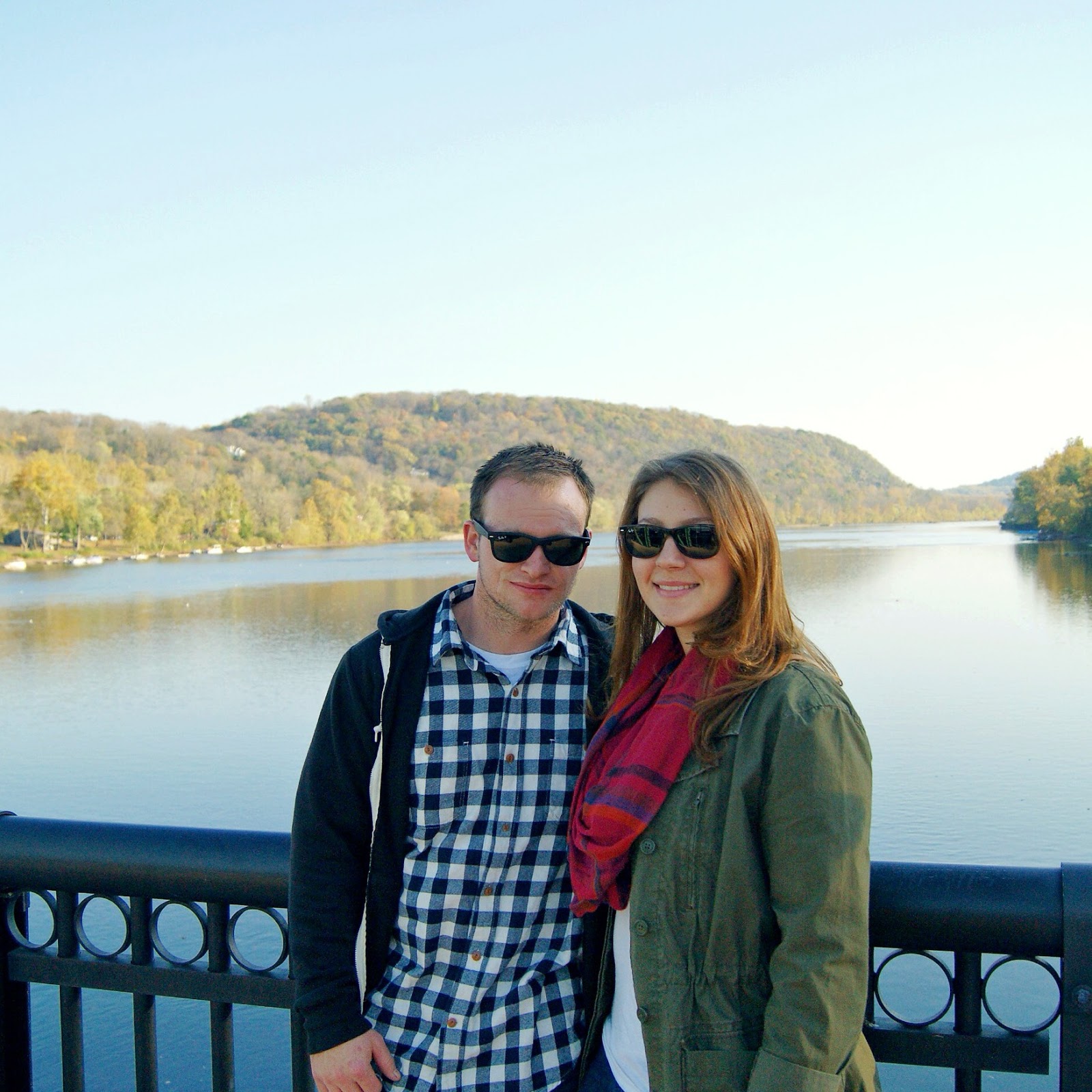 Here's Walt & Val. I Love these guys to bits! 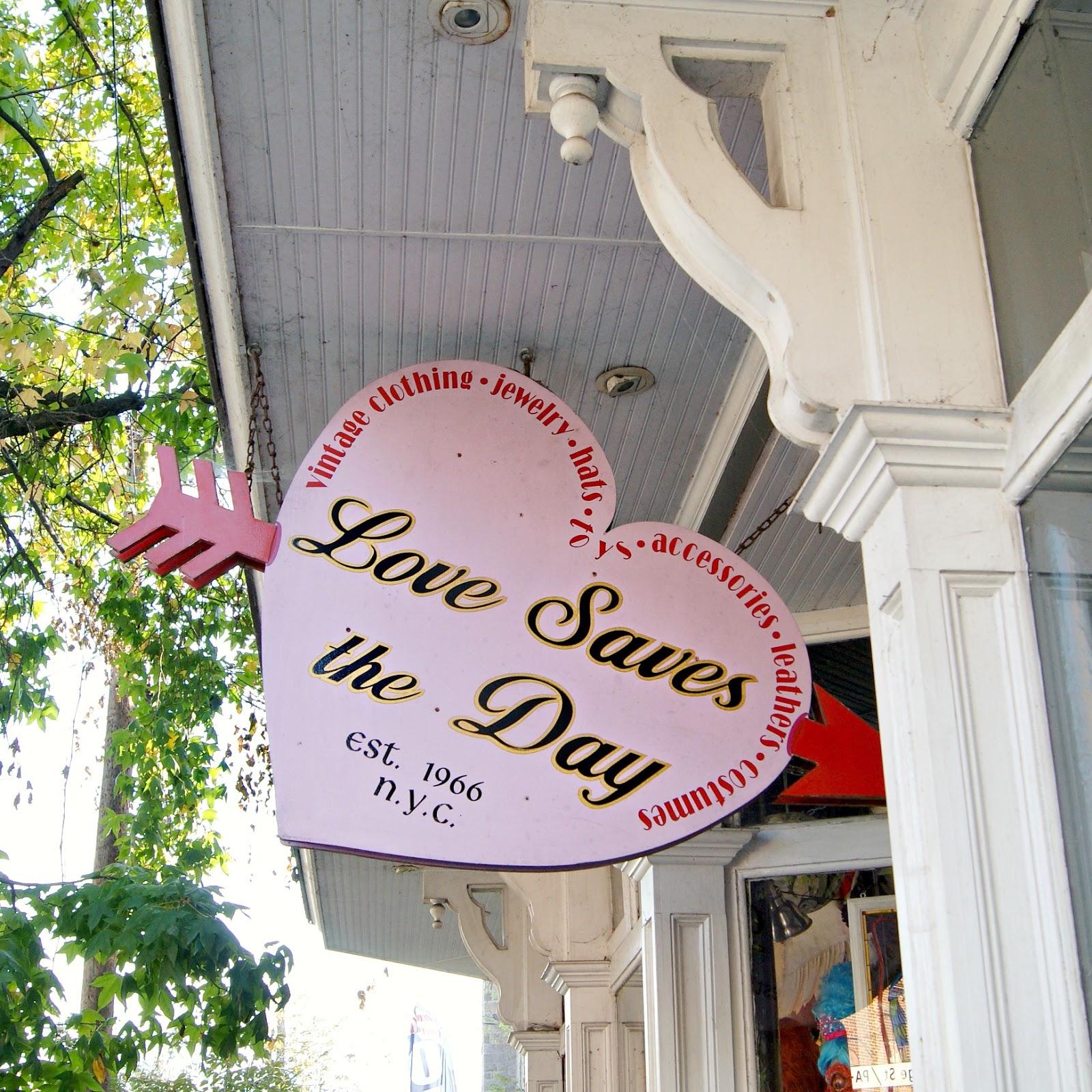 So, like I said…the towns of Lambertville and New Hope  are at once very similar…and Vastly different. Case in point...Love Saves the Day in New Hope. I don't think this store could stand among the antique shops of Lambertville. It's brimming with vintage collectibles, clothes, and crazy stuff galore. It's part museum, and 100% psychedelic claustrophobia. Even though we know exactly what to expect when we visit Love Saves The Day, we always have to do a quick walk through to experience it all over again. ha! And don't you love their sign?! 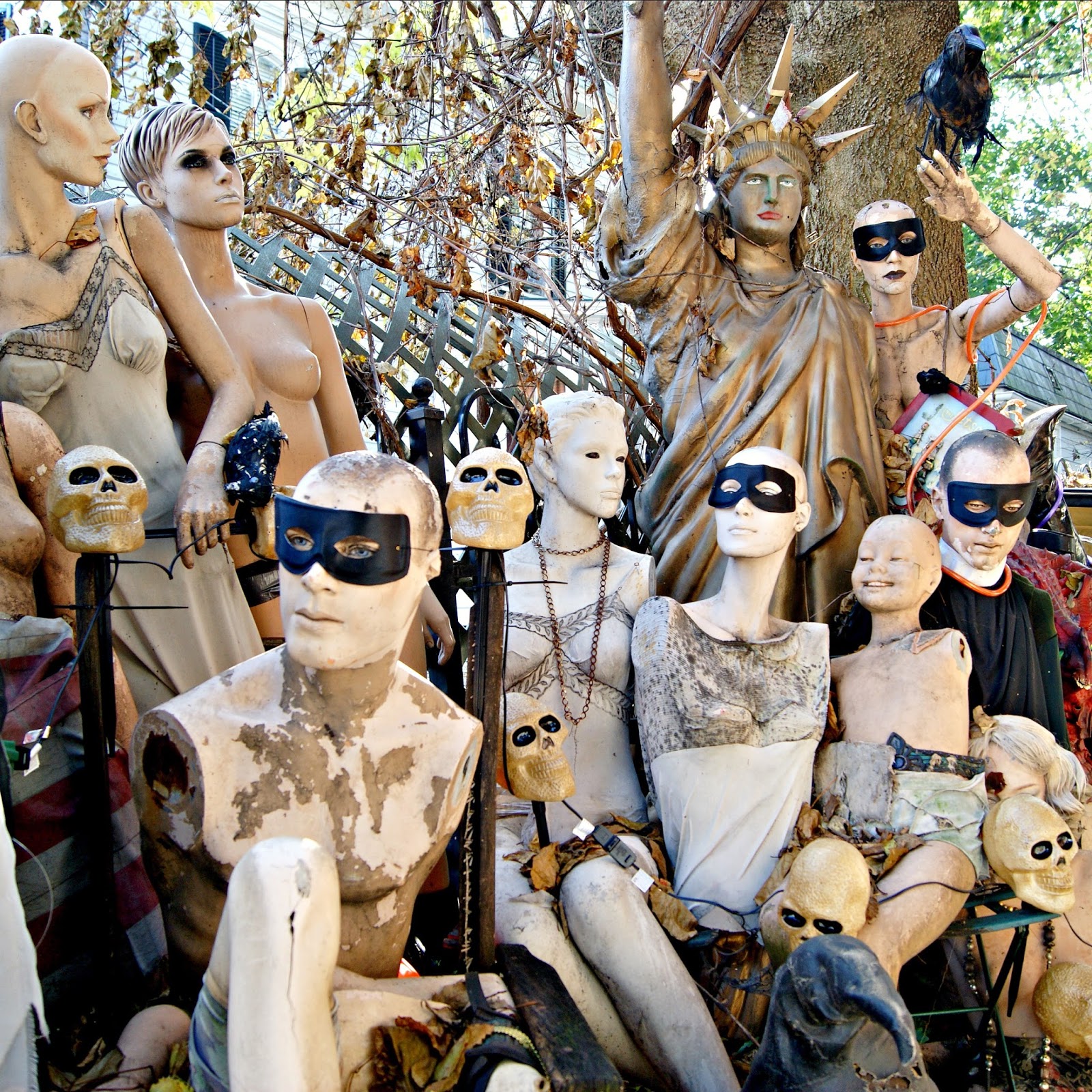 And their alley is always a treat…eeeek right? They've been doing these displays for years. Doesn't that guy all the way to the right look real? Like he's hiding out among the mannequins?
Both town were full of amazing fall and Halloween displays! Walt was pretty psyched about the Pumpkin Ice Cream! It had chunks of pie crust in it!! 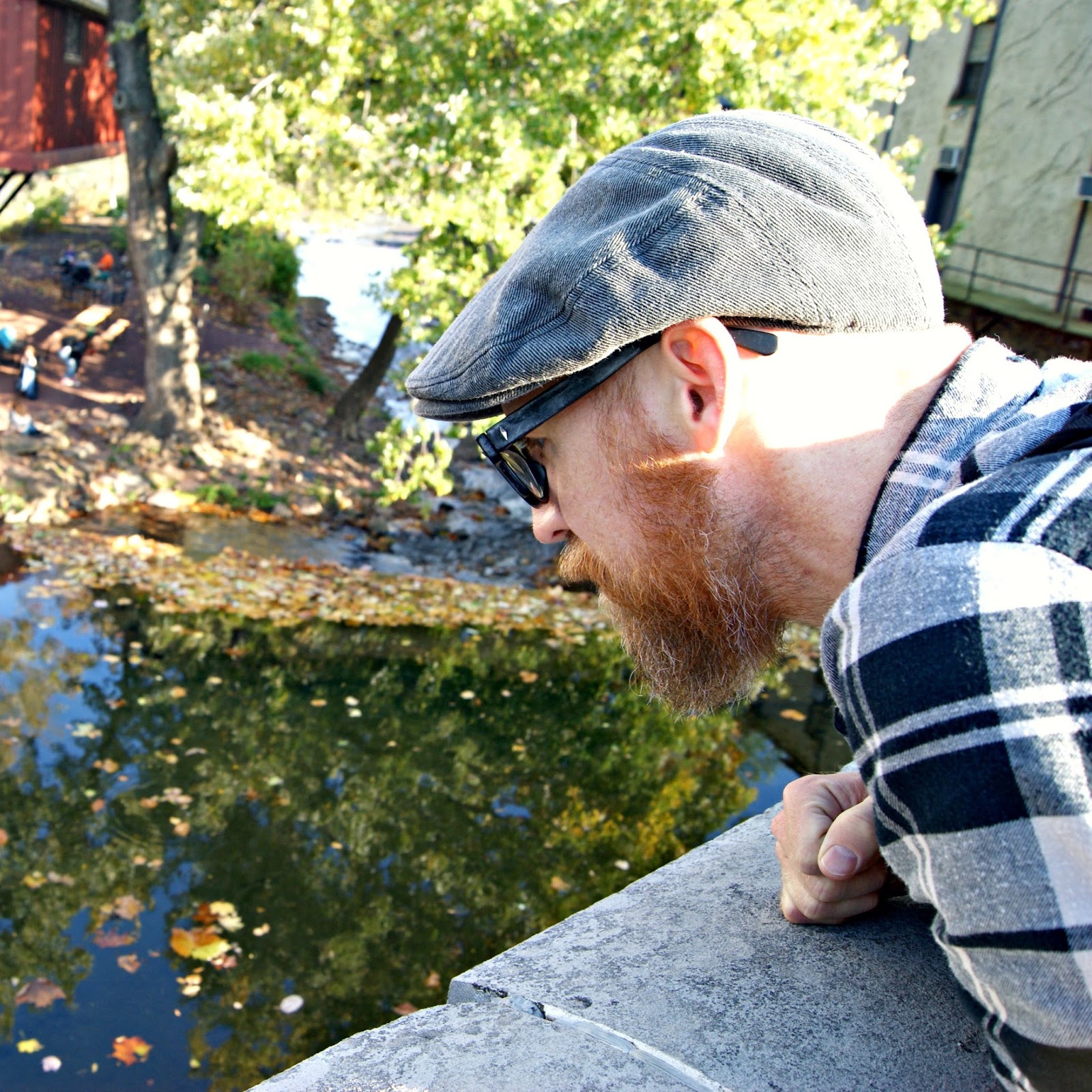 Here's Aaron looking for fish in the pool at the top of the waterfall in front of the Bucks County Playhouse, which is located on the site of a former grist mill right on the bank of the Delaware River. 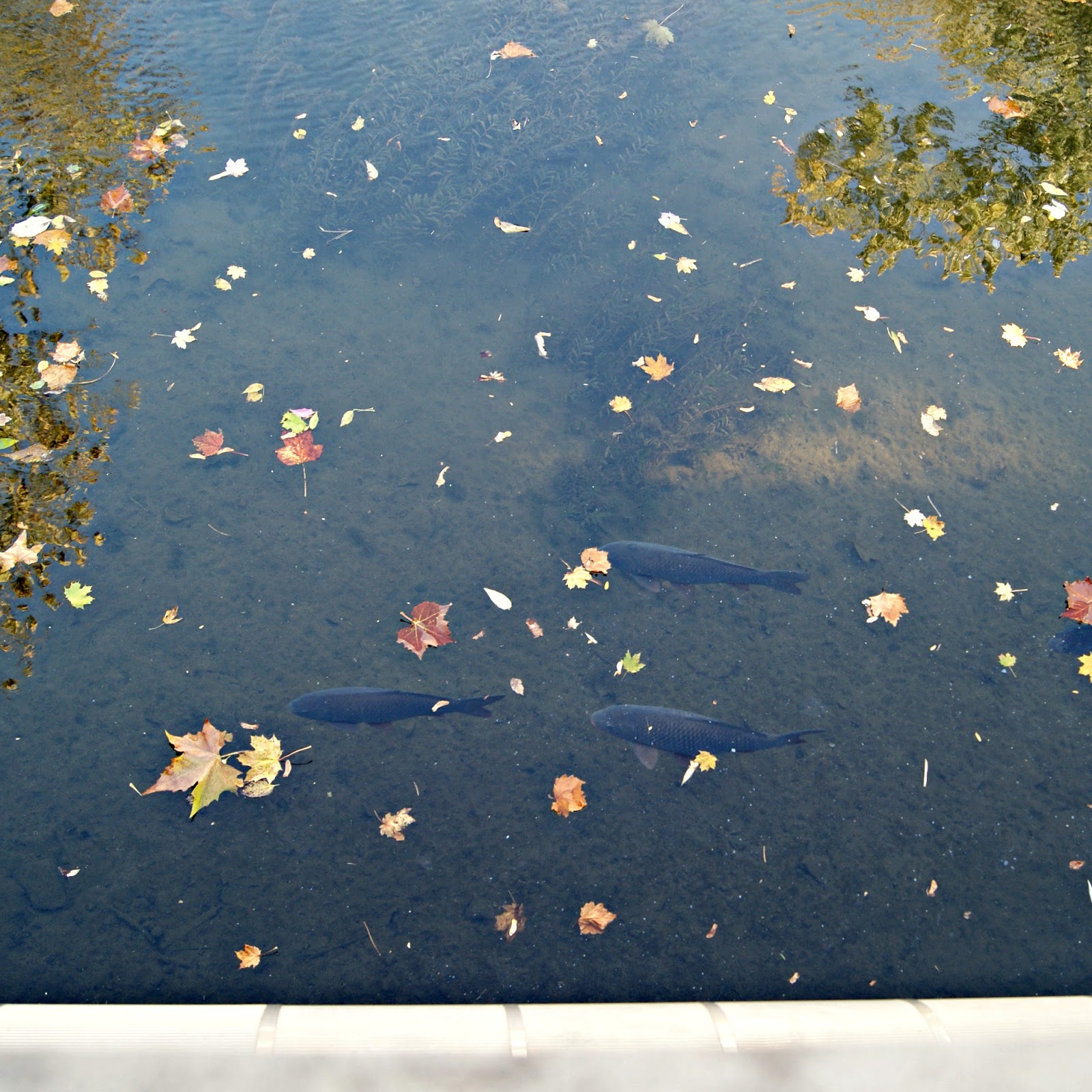 And he found them. A whole lotta carp just lazing about in the afternoon sun...they were huge! 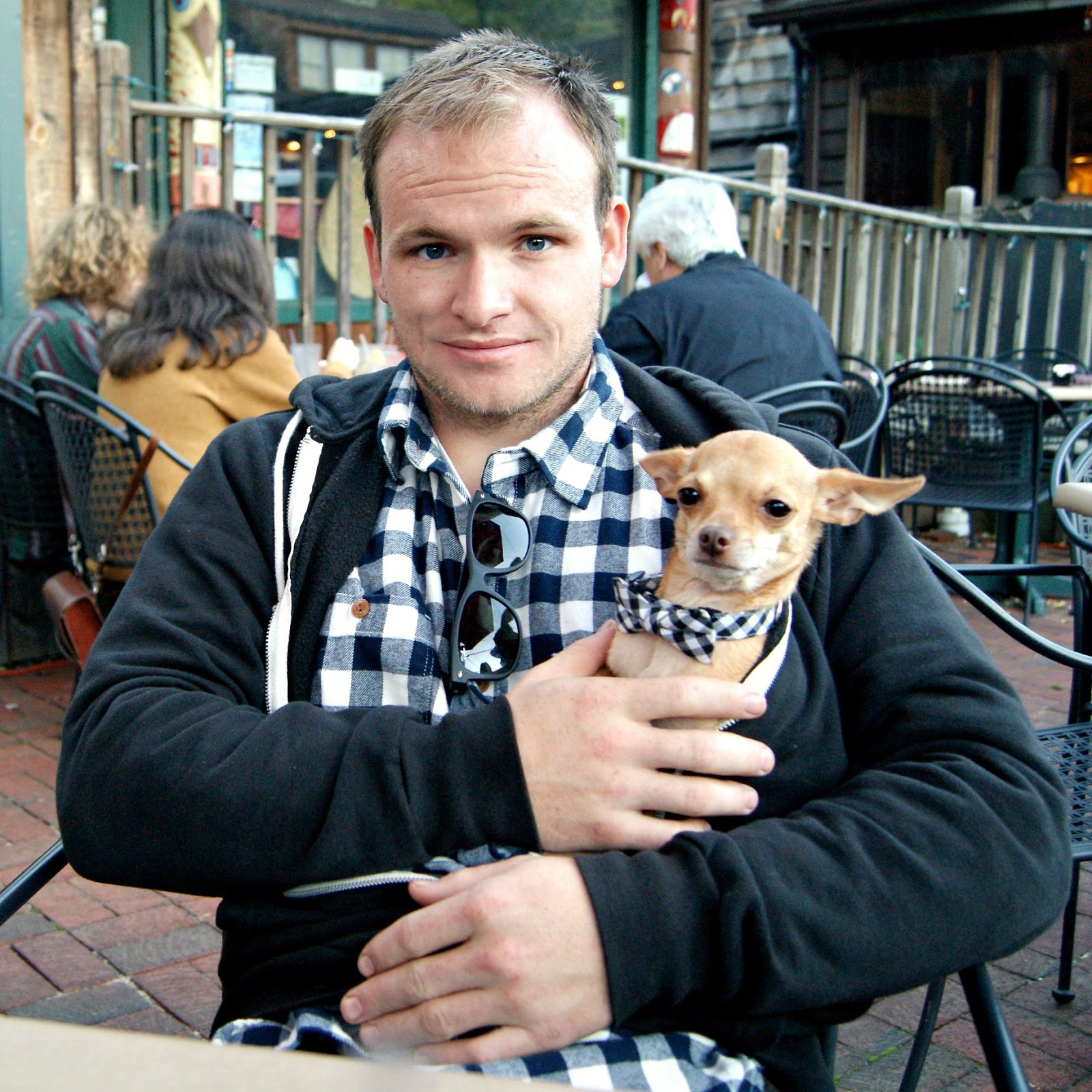 Both towns are super dog friendly, and there's lots of outdoor dining. Here's Lt. Dan on his Uncle Walt's lap waiting for dinner! 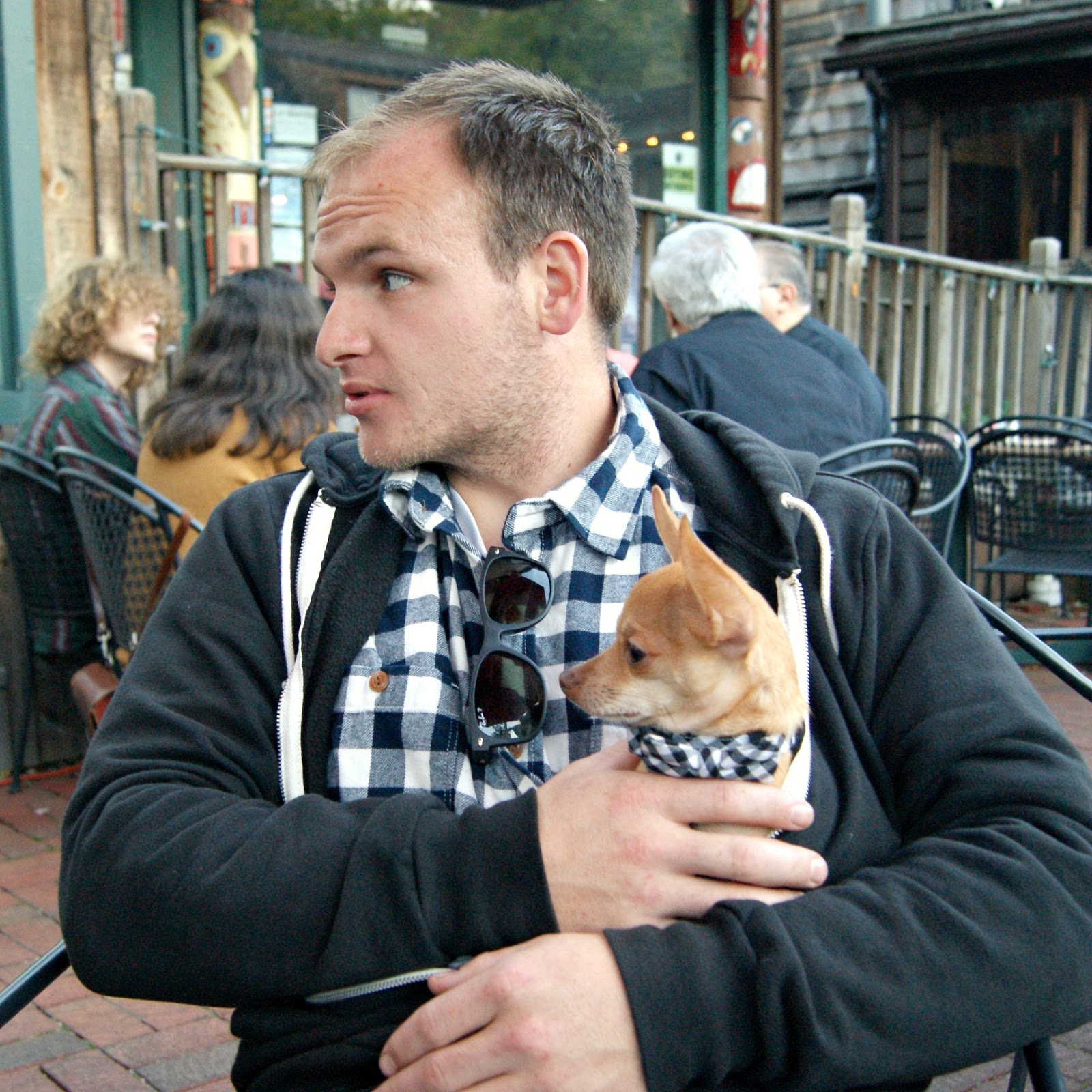 I got such a kick out of this pic. They both turned to see what was being served at the next table…I believe it was loaded nachos piled about ten feet high! And I love that these buddies had matching outfits on.
Throughout the day we did so much walking, and even though we went in a ton of shops, we came nowhere close to seeing everything. Next time we'd love to stay the night. And it would be awesome to do the train ride on the New Hope & Ivyland Railroad. We had parked our car in the lot of the old train station which has an old steam engine train that offers a fall foliage tour. In the daytime the station was so old school and charming, and by the time we got back there it was nighttime and all of the lighting was orange for Halloween…it was kinda creepy, but in a good way. 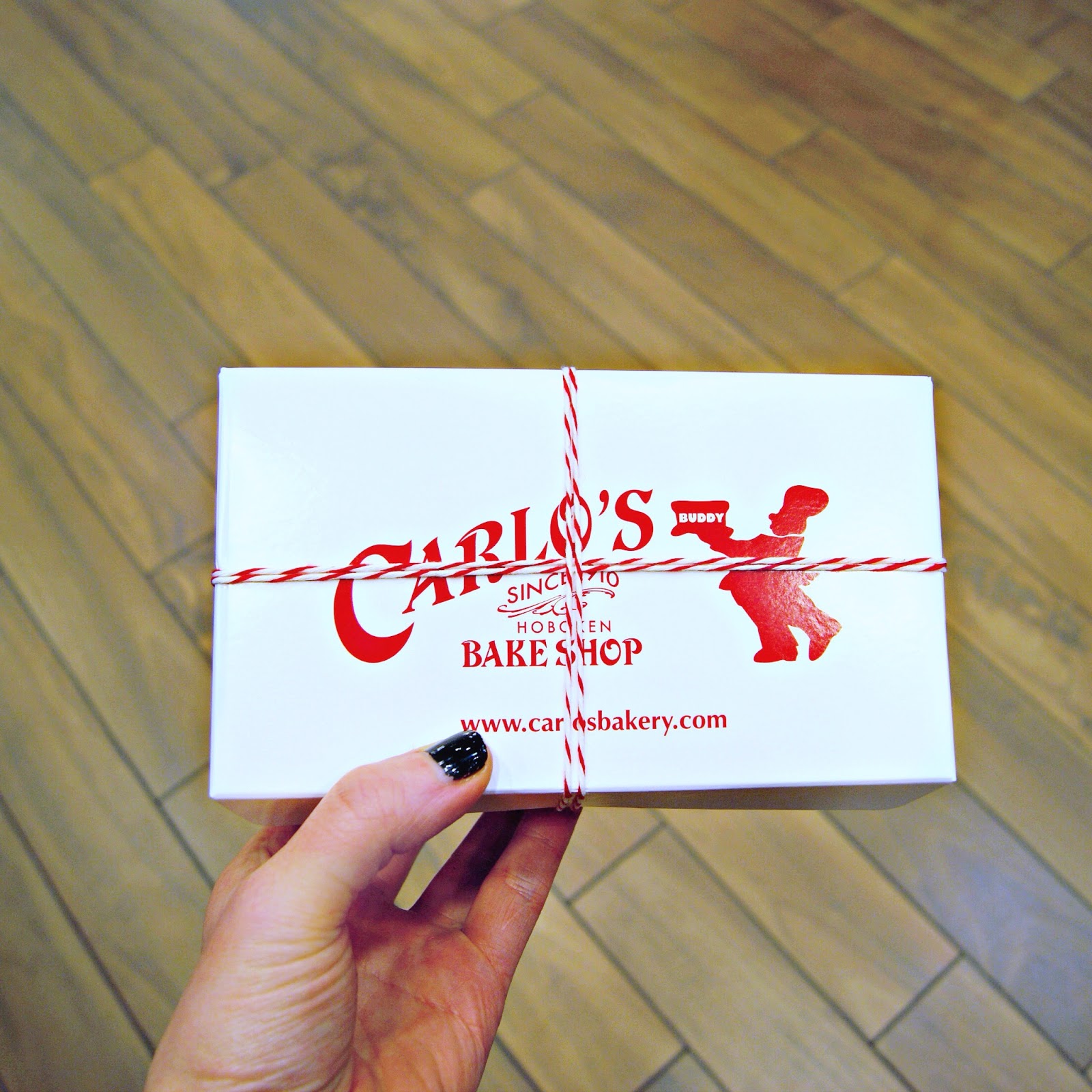 And to finish our night we went into Red Bank to visit Carlo's Bakery. Yes…that Carlo's. I Love their boxes! So cute!

It was such a fun day! I seriously can't get over how spoiled we were weather-wise. It was a much needed break before things get really hectic around here. Today is organization day, and Walking Dead, and Boardwalk Empire, and then it's back to work work work.
Thanks again for reading!
xo, Jenny…and Aaron says hi!